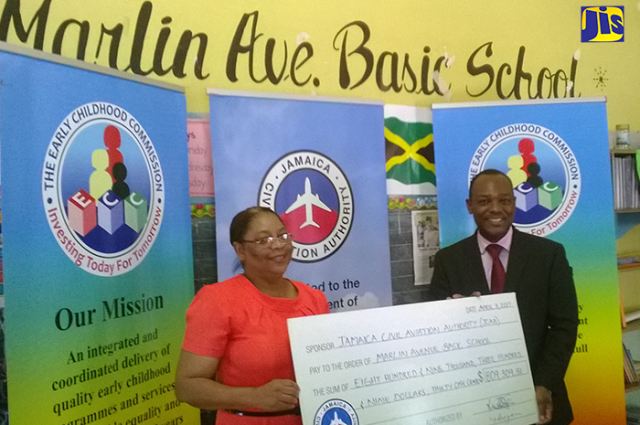 On Monday, April 3, Deputy Director General of Regulatory Affairs at the Jamaica Civil Aviation Authority (JCAA), Rohan Campbell, presented at cheque valued at   $809,309.31 to the principal of the School, Margaret Campbell, to assist in the certification process.

“We saw it as a great opportunity to assist.  As an organisation that values Jamaica’s development, we have always had a great interest in supporting education. We are in the business of regulation and, therefore, appreciate the need for standards in early-childhood development,” Mr. Campbell said.

The elated principal, Mrs. Campbell, was close to tears as she accepted the much-needed donation.

“We were strapped for cash and this injection will assist us to achieve certification. We are so grateful for the help of the Early Childhood Commission team and others who offered their support,” she said.

The funds will be used to improve lighting in the classrooms, establish a playground and repaint playground equipment and the school building.

Meanwhile, Member of Parliament for St. Catherine South, Fitz Jackson, who contributed the perimeter fencing for the school, added his support for the early-childhood standards.

“It’s a universally accepted fact that preparation of a child at the early-childhood level bears significance at the primary and secondary levels,” he noted.

Marlin Avenue Basic School was opened in 1979 and has 28 students enrolled and five members of staff, including two trained teachers.

The school has, so far, met 72 per cent of the operating standards required for certification by the ECC.

CAPTION: Principal of the Marlin Avenue Basic School in Portmore, St. Catherine, Margaret Campbell, accepts a representational cheque for $809,309.31 from the Jamaica Civil Aviation Authority’s Deputy Director General, Regulatory Affairs, Rohan Campbell. The presentation was made at the school on Monday, April 3. The cheque will be used to assist the school in achieving full certification under the Early Childhood Commission 12 Operating Standards for Early Childhood Institutions.