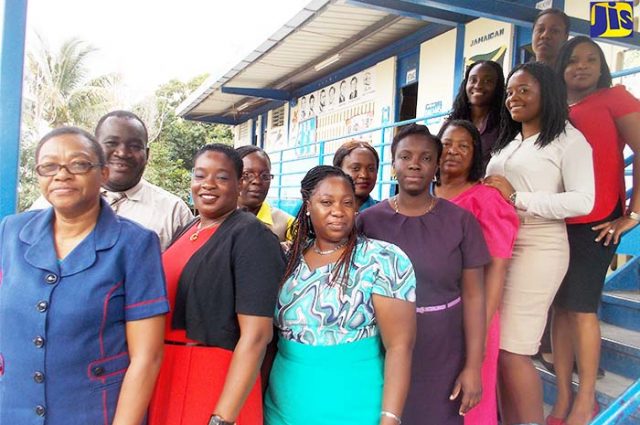 After months of planning and preparation, the school was able to successfully stage its first literacy fair on February 23.

“It was a success; literacy was shining through everybody’s pores. Although it rained, the competitions happened, the students were engaged in all the activities the entire day,” she gushed to JIS News.

Miss Gordon, who has been at the 60-odd-year-old institution since September 2015, says the fair was to showcase the work of the students to the rural St. Andrew community.

Calling on her experience as a former member of the national literacy team, charged with providing direct support to teachers in order to raise literacy standards, Miss Gordon and her staff set about organising the event.

She notes that she had planned similar activities for schools she worked with as a literacy specialist.

“These literacy fairs were very successful. They really brought the community together, created the opportunity to showcase what the schools are doing and engaged parents by giving them the chance to be part of the change process. It worked then, so I thought this is something I should replicate in my school,” she reasons.

Miss Gordon says she is hoping that the fair will become an annual event as she undertakes the task of transforming Woodford Primary and Infant School, making it the institution of choice for residents of the area and surrounding communities.

The school, nestled in the cool hills of the Blue Mountains, has a population of 172 students, with 13 teachers and six support staff.

According to Miss Gordon, up to four years ago, the school operated a multigrade system, which meant that two grades were taught by the same teacher. The grades are now separated, with individual teachers.

She notes that parents did not trust the multigrade system, so they would find other schools to send their children.

Miss Gordon says that Woodford is the only public primary institution in the farming community, and she wants parents to know that it is a place they can trust.

“They can send their children here and we will take care of them. The children will get the same level of education that they are thinking they can get anywhere else,” she says.

Students of Woodford Primary and Infant School show off the trophies that they won during the school’s inaugural Literacy Fair, which was held recently at the institution in rural St. Andrew.

Miss Gordon tells JIS News that the school’s literacy standard has been increasing gradually over the years. However, in the year that she assumed the role as principal, the literacy rate jumped from 60 per cent to 78 per cent.

“At the last sitting of the Grade Four Literacy Test in 2016, it moved up to 80 per cent, so we have been doing well,” she notes.

The literacy programme also gets support from a Peace Corps volunteer, Jon Daniel Stephenson, who is a literacy specialist assigned to the school since 2015. In 2016, 11 students sat the Grade Six Achievement Test (GSAT) and there was a marked improvement in performance. One student was placed at Jamaica College with a 94 per cent average, while a few were placed at Merl Grove High School.

Fifteen students sat this year’s GSAT and the school is now preparing 24 students for 2018.

Miss Gordon comes to Woodford Primary and Infant School with a wealth of experience in the education sector.

She has taught at all levels of the education system and was assigned as a literacy specialist for four years. She is a graduate of Mico Teachers’ College (now The Mico University College) and the Western Carolina University in the United States where she attained a Bachelor of Science Degree, specialising in Special Education; and a Master’s Degree in Administration and Leadership.

“The last thing on my mind was to become a teacher. In 1992 after leaving high school at the age of 17, I remember going over to the Stony Hill Preparatory School and telling the principal there that I just finished high school and my parents cannot afford to send me anywhere else unless I can send myself. So the principal said to me ‘I have a teacher that I want you to sit with and assist her’, and that is how my career started,” she explains.

Twenty-five years later, she is still in the education system serving at the helm of Woodford Primary. The soft-spoken first-time principal describes herself as easygoing, focused and a perfectionist.

“Sometimes, persons will say to me, let it go, it will be ok, but I just want to see things done right,” she points out.

Miss Gordon says that as someone who had learning challenges she is able to relate to some of the difficulties children face and provide guidance and advice to her teachers in order to enhance the teaching and learning process.

“As a child growing up, I believe I was smart, but I did not do well at school. I could not sit still in my chair, I was all over the place, I did not find school interesting at the time,” she recalls.

She says it was only later in life that she started hearing about attention deficit and hyperactivity disorder (ADHD) and realised from her studies in special education that she shared some of the same traits.

“So, my own experiences as a child have helped me a lot in dealing with children who may have special issues. I think I bring to the table that kind of perspective to understand children, who may be in a classroom and are at a disadvantage because a teacher is not able to understand fully what is happening with that child,” she points out.

Miss Gordon explains that as an administrator, “teachers would come to me and say that this is happening and I may say to them, ‘you need to observe this one, or instead of putting this child here, you may put him/her there and watch them carefully. The child might not be seeing or hearing so well, or you may have to move a child from a particular seat”.

“A child who may be fidgeting a lot, just put them beside you and just touch them now and then, because, sometimes, when they are moving, if you just hold on to them and just give them a soft touch, they will calm right down,” she notes further.

Miss Gordon tells JIS News that she relishes her role as a principal, which she likens to a mother having to deal with different family members.

“There are the teachers, parents, students, and everybody is looking for firm leadership. They want to know ‘does she have a vision, can I trust her?” she says.

Meanwhile, she is appealing to corporate Jamaica to assist the school in setting up a resource facility and a computer centre.

“The school needs a resource centre that is technology-driven with a wide variety of equipment that students can use to enhance learning. With a resource centre, we can then take children out of the classroom, and engage them in pull-out sessions in a more enriching environment,” she points out.

“We have students who are bright and just want that opportunity to excel. So, I am imploring organisations and individuals to do a little bit more; to come out of their comfort zone in the cities and urban areas; come up to the hills, because schools like ours are waiting and ready.

Like our school motto ‘A Beacon on the Hill’, we are shining down on you, so look up and you will see us,” she says.