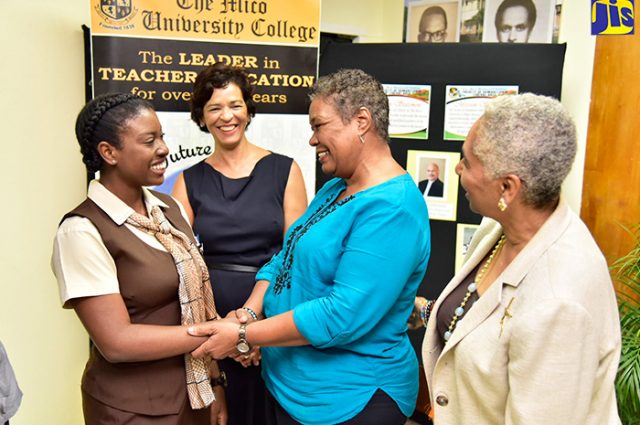 JIS: President of The Mico University College, Dr. Asburn Pinnock, has called for increased private-sector support for education through the provision of scholarships and bursaries to benefit young people from financially challenged backgrounds.

He said that education is expensive but is key in breaking the cycle of poverty in many families across the island.

Dr. Pinnock, who was speaking at a donor appreciation reception at Mico’s Marescaux Road campus in Kingston on Monday (April 30), said increased involvement of the private sector can add to a more prosperous and stable society.

“Businesses rely on the stability of a country, and results have shown that a stable nation is a much more prosperous country. We believe that education can help to solve some of the issues of crime,” he said.

“So, by investing in education and creating more opportunities for persons… we reduce the likelihood of persons moving into deviant and antisocial behaviour,” he added.

Dr. Pinnock told the donors that students at the institutions who benefit from grants and other financial support are giving back to their communities by volunteering at early-childhood educational institutions and participating in other efforts.

“They become leaders; so the multiplier effect is worth it. They are first to help; any event you have, they will be there,” he said.

Meanwhile, scholarship recipient, Britonny Haye, told the donors that their contribution is “immeasurable”.

“Hope had been restored to me, motivating me to work harder, driving me to do my utmost best and steering me down the narrow path of success,” she said.

The reception was held to say thanks to the alumni and corporate companies that have provided support to Mico over the years, and to hear the testimonies of those that have benefited and continue to benefit from the contributions.

Mico receives $4 million each year in scholarships, which is credited to the accounts of second- to fourth-year students to complete their degrees.

CAPTION: The Mico University College student and beneficiary of the Desmond Gascoigne Memorial Scholarship, Britonny Haye (left), exchanges warm greetings with Director of the scholarshp fund, Gloria Gascoigne (second right). Occasion was a reception for scholarship donors held on Monday (April 30), at Mico’s campus on Marescaux Road in Kingston. Sharing the moment are Director of the James Lee and Clarice May Gore Memorial Scholarship, Christine Gore (second left); and Director of Alumni and Development at Mico, Sharon Wolfe.

E-Payment For Watchmen and Caregivers

If you want to ignore the following instructions and you can go directly to entering informationPlease follow the steps below to enter your banking information:Step 1Upon visiting the website the first screen will be as follows:Enter your: first name, last...
read more