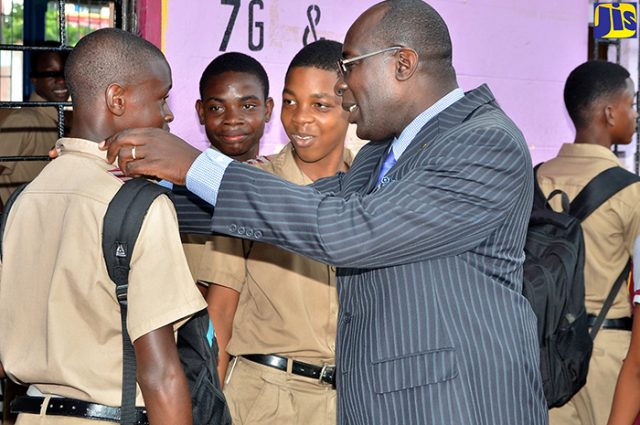 JIS: The Government provides public access to education for approximately 763,798 students or 71 per cent of the school age cohort (3-24).

Of this total, 613,136 students are enrolled across 3,000 pre-primary, 995 primary and preparatory schools and 180 high schools, both public and private.

This was disclosed by Minister of Education, Youth and Information, Senator the Hon. Ruel Reid, while addressing an Education World Forum in London, United Kingdom (UK), today (January 24).

There are over 150 vocational training centres and other private training institutions.

The Minister also informed that there are 17 tertiary institutions with an enrolment of close to 28,000 students and four established universities with approximately 75,000 students, with a gross enrolment rate of 28.9 per cent, adding that Jamaicans are also enrolled in several offshore universities.

Senator Reid said the Government of Jamaica is committed to the continued reformation and transformation of Jamaica’s education system.

“Jamaica’s education system has gone through a series of reforms over many years. These reforms have been primarily aimed at creating greater access to an education system characterised by quality, inclusiveness and equity, which are relevant for the real world context,” the Minister said.

He added that as part of the education transformation programme, the fundamentals and practice of teaching and learning have centred on developing curricula that equip students to respond and adapt to a rapidly changing world.

“The Jamaican system of education continues to do relatively well where access to early childhood, primary and lower level secondary education, attendance rates and youth and adult literacy rates is concerned,” the Minister noted.

Senator Reid said that Jamaica is committed to have in place a world-class education and training system that produces well-rounded and qualified individuals who will be able to function as creative and productive individuals in all spheres, both locally globally.

The forum is being held from January 22-25 under the theme: ‘Employment, Enterprise and Education – Meeting the Needs of All’.

Over 300 Ministers of Education and advisers representing over 80 per cent of the world’s population have gathered to debate future education policy.

CAPTION: In this file photo, Minister of Education, Youth and Information, Senator the Hon. Ruel Reid (right), adjusts the collar of a student at Spanish Town High School, during a tour of the institution.