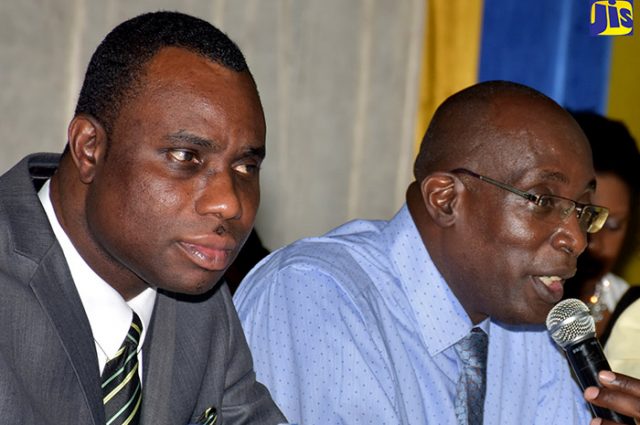 JIS: Public sector workers with children attending public educational institutions will not be required to pay auxiliary fees for their enrolment as of the 2018/19 academic year, which begins in September.

This was announced by Permanent Secretary in the Ministry of Education, Youth and Information, Dean-Roy Bernard, during one in a series of parent sensitisation sessions, which was held for Regions 1 and 2, at the Karram Speid Auditorium, Merl Grove High School, Kingston, on August 16.

Mr. Bernard told JIS News the decision is a negotiated agreement between the Ministry of Finance and the Public Service and unions representing public sector employees.

“That is a Government policy and this (Education) Ministry intends to give full support to (it). So we are sending out a bulletin to our schools just to highlight and remind them of this,” he said.

The bulletin is slated to be circulated to public schools by early next week.

Mr. Bernard noted, however, that beneficiary parents must present proof of employment at public sector institutions to which they are attached, in order to be exempted from paying the fees.

“We ask that you take a letter from your organisations and also take your IDs with you (to) properly identify yourselves so that the system can run smoothly. Where that occurs, we expect our Principals and our school leaders to ensure that our public sector workers’ children can be properly accommodated. They work very hard and they deserve that,” he said.

Mr. Bernard, who said the initiative was a “win-win situation”, described it as an “investment in education” which, he noted, “is the key to moving this country forward.”

As such, he said the move is “timely”, adding that the Ministry “supports full access to education.”

The sensitisation sessions, which are organised by the Ministry, aim to increase parent involvement in their children’s learning as well as broader educational policy initiatives.

CAPTION: Education, Youth and Information Minister, Senator the Hon. Ruel Reid (right), addressing parents during a question and answer session at the Ministry’s parent sensitisation session for Region’s One and Two, at the Karram Speid Auditorium, Merl Grove High School, Kingston, on August 16. Also pictured is Permanent Secretary in the Ministry, Dean-Roy Bernard.