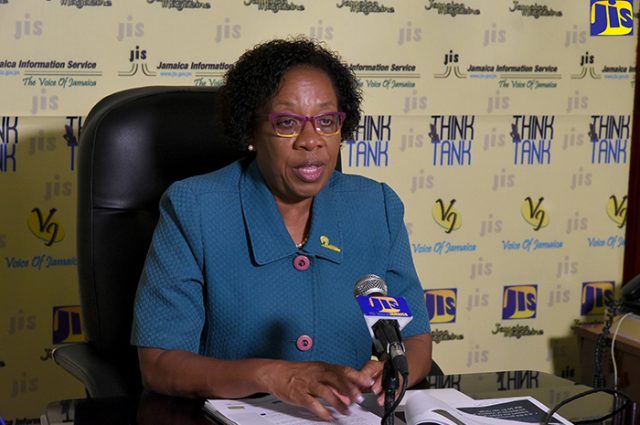 JIS: A total of 130 schools have been equipped with hand-held metal detectors and walk-through devices installed in five institutions under the US$4 million Improved Safety and Security in Schools Project.

The initiative, launched in June 2017, involves partnership between the Ministry of Education, Youth and Information and the United States Agency for International Development (USAID) and is being coordinated by the National Education Trust (NET).

It is being undertaken over two years with the USAID contributing US$3 million and the Government of Jamaica US$1 million.

Speaking at a JIS Think Tank on Tuesday (August 14), Project Manager, Yvonne Brown, explained that the objective is to transform schools and surrounding areas into safe zones, and reduce violence among students and youths ages 10-29. She noted that a “multilayered and multi-sectoral approach” is being undertaken aimed at engaging communities, parents, and public and private sector partnerships.

“We have been focusing on school activities and out-of-school activities, therefore, both unattached youth and those in the formal school system are targeted,” she said.

The provision of metal detectors is part of the physical infrastructure component of the project, which also includes the installation of perimeter fencing.

Other components include upgrading the Health and Family Life Education (HFLE) Curriculum to entail anti-bullying as well as aspects of the Child Care and Protection Act; guidance and counselling to involve the roll-out of the School Wide Behaviour Change Modification Programme; and co-curricular activities with emphasis on uniformed groups.

Ms. Brown told JIS News that there is collaboration with the Jamaica Combined Cadet Corps and the Caribbean Merchant Marine Cadet Corps for the establishment of uniformed groups.

She said that at the end of the project in July 2019, the aim is to have over 300 new uniformed groups within schools, with each institution to have at least one functioning body.

A key part of the project is the establishment of ‘parent places’. Through collaboration with the National Parenting Support Commission (NPSC), several facilities have been set up to provide training and other support to improve parenting skills.