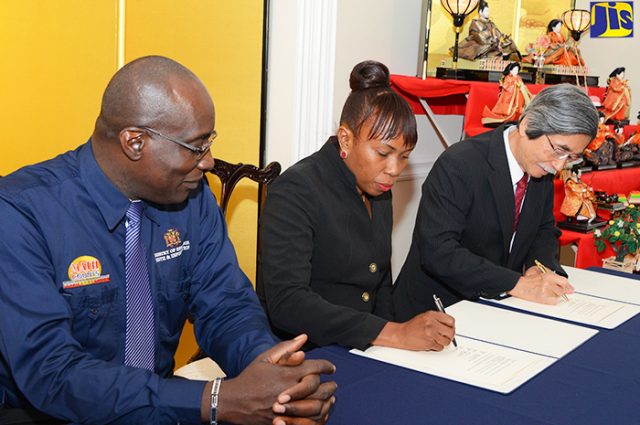 JIS: The Government of Japan has provided grants totalling $24 million (US$195,817) to fund expansion of the Highgate Primary and Junior High School in St. Mary and Middleton Primary School in St. Thomas.

The provision of $14 million (US$113,603) to Highgate Primary and Junior High will fund the construction of two additional classrooms that will increase the institution’s complement to 13, thereby decreasing challenges with overcrowding.

Middleton Primary School will benefit from a new canteen and food-storage area, to be built at a cost of $10 million (US$82,214).

Both allocations have been provided under the Japanese Government’s Grant Assistance for Grassroots Human Security Projects and initiated through a partnership forged between the National Education Trust (NET) and the Japanese Embassy in Jamaica.

Agreements formalising the provisions were signed by Education, Youth and Information Minister, Senator the Hon. Ruel Reid, and Japan’s Ambassador to Jamaica, His Excellency Masanori Nakano, on March 9, at the Ambassador’s official residence at Paddington Terrace in St. Andrew.

Senator Reid, who welcomed the provisions, noted the collaboration between NET and the Embassy, which is facilitating educational development projects in Jamaica.

“This partnership is aimed at meeting primary-education needs at schools in greatest need. This has resulted in NET securing several grants under the Grassroots Human Security Projects,” he added.

Senator Reid thanked the Japanese Government for its continued support of Jamaica’s development, particularly in education, pointing out that “your partnership is contributing to tangible improvements in the lives of many of our children”.

Senator Reid also lauded NET on its work in fulfilment of its mandate, “to mobilise financial and quality resource investments for schools in Jamaica”.

Meanwhile, Ambassador Nakano expressed the hope that the grant will help to alleviate problems with overcrowding at Highgate Primary School, “and will be fully utilised to further enhance your educational activities”.

He further added that the new canteen at Middleton Primary School “will accommodate the needs of all the students, who will be able to eat in a safe and secure environment”.

“Jamaica has great potential for (achieving) further economic and social development as a progressive nation. This is why we are working with teachers and staff at your respective schools, as well as personnel from the Ministry of Education, to provide you with a better school environment. It is my strong belief that education is key to develop a nation and a people,” Ambassador Nakano said.

NET’s Director for Donor and Partnership Management, Latoya Harris, said the allocations to both schools were indicative of what could be achieved through the “power and strength of partnerships”.

Both school Principals, Jennifer Crawford of Middleton Primary, and Adassa Henry of Highgate Primary and Junior High, welcomed the provisions, noting that they will go a far way in enhancing the delivery of education to the children at their institutions.

CAPTION: Education, Youth and Information Minister, Senator the Hon. Ruel Reid (left), looks on as Japan’s Ambassador to Jamaica, His Excellency Masanori Nakano (right), and Principal of Middleton Primary School in St. Thomas, Jennifer Crawford, sign an agreement for a $10-million (US$82,214) grant to the institution to construct a canteen. The signing took place at the Ambassador’s Paddington Terrace residence in St. Andrew on March 9. The sum has been provided under the Japanese Government’s Grant Assistance for Grassroots Human Security Projects Programme.