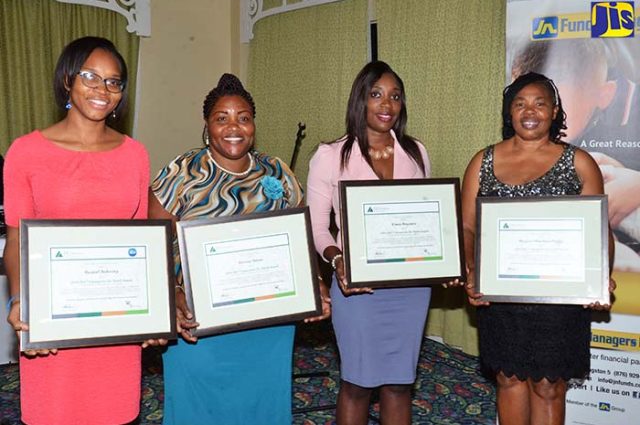 JIS: One hundred and sixty-eight high schools are now in a state of readiness to facilitate students in the study of entrepreneurship for the 2017/18 academic year, which begins in September.

The initiative, which was launched late April by State Minister of Education, Youth and Information, Hon. Floyd Green, aims to stimulate the students’ interest in business.

Director of Regional Educational Services in the Ministry, Kasan Troupe, said the regional directors have completed meetings with JAJ in this regard.

“Each director is now looking at the schools to decide how we are going to timetable this. The subject will be paired with our resource and technology programme,” she informed.

Mrs. Troupe was speaking to JIS News at JAJ’s fifth annual Champions for Youth Awards and Silent Auction held at The Knutsford Court Hotel in New Kingston on May 31.

The entrepreneurship programme will offer real-life experiences that will build knowledge, capacity and confidence in young people and assist them in forming their own businesses.

Mrs. Troupe informed that delivery of the subject in the first half of the academic year will focus on “giving the theory and the skill set to the children as it relates to business”.

She also informed that come January to June 2018, “students will actually be doing the business itself, the application and examining the foundations of setting up a business and applying the skills”.

Teachers will also benefit, as they will undergo training in preparation to teach the subject.

Meanwhile, the Champions for Youth Awards and Silent Auction seeks to recognise the most outstanding organisation and teachers in each parish, as well as companies and institutions that were considered the most impactful in helping Junior Achievement to reach its goal of empowering more than 10,000 youth with entrepreneurship skills during 2016/17.

President of JAJ, Alphie Mullings-Aiken, said the students impacted represent a wide cross section, because “every student should and will understand how to run a business”.

Among the teachers recognised are Tamar Myles of Wolmer’s Boys’ School in St. Andrew, Kimoy Benjamin of the Kellits Primary in Clarendon, Michelle Bennett of York Castle High School in St.

The President’s Award went to the Gleaner and the Financial Services Commission for the support given to JAJ.