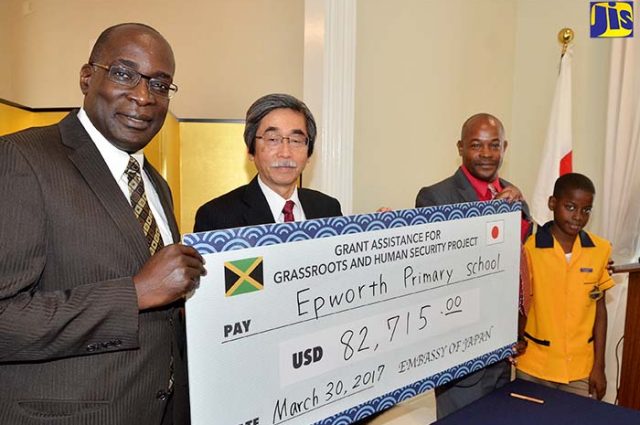 The provision of $10 million (US$82,715) to Epworth Primary School will be used to construct two additional classrooms that will enhance the teaching and learning environment at the institution.

Zion Hill Primary School’s funding of $10 million (US$82,782) will be used to carry out extensive safety, security and sanitation works, and retrofit an empty room for use as an ICT resource room.

Both allocations were provided under the Japanese Government’s Grant Assistance for Grassroots Human Security Projects and initiated through a partnership forged between the National Education Trust (NET) and the Japanese Embassy in Jamaica.

The NET will act as Project Manager for both projects, which are slated to commence in April 2017.

In his remarks, Senator Reid thanked the Japanese Government for its continued support of Jamaica’s development, particularly in education.

He said the projects will greatly benefit students, teachers and other stakeholders at the schools.

Senator Reid noted that partnerships are critical for the growth of the education sector and encouraged other stakeholders to come on board and support and develop the sector.

In his charge to students, Senator Reid urged them to take their education seriously.

“We want you to understand that all of us are investing in you, because we want a better Jamaica and we want a world-class highly trained and skilled workforce,” he said.

Meanwhile, Ambassador Nakano expressed hope that the new projects will serve the needs of all teachers and students, who will benefit from and improved school environment with better resources and infrastructure as well as additional classrooms.

He said the support for Jamaica’s education sector is critical, as education is the key to develop a nation and people and leads to a society with less antisocial behaviour.

“This is a tremendous gift and we need you to take care of the plant, as it is your own home, because that is where you spend the vast majority of your days, and it is an investment in you, your community and this country,” she said.

Both school principals expressed appreciation for the grants, noting that these will greatly assist with enhancing the delivery of education to the children at their institutions.

CAPTION: Minister of Education, Youth and Information (left), Senator the Hon. Ruel Reid (left); Japan’s Ambassador to Jamaica, His Excellency Masanori Nakano (second left); Principal, Epworth Primary School, Kirk Spencer; and student, Epworth Primary School, Samuel Henry, display a symbolic cheque during a signing ceremony at the Ambassador’s Paddington Terrace residence in St. Andrew on March 30. The $10 million (US$82,715) to the institution will be used to construct two additional classrooms. The money has been provided under the Japanese Government’s Grant Assistance for Grassroots Human Security Projects and initiated through a partnership forged between the National Education Trust (NET) and the Japanese Embassy in Jamaica.