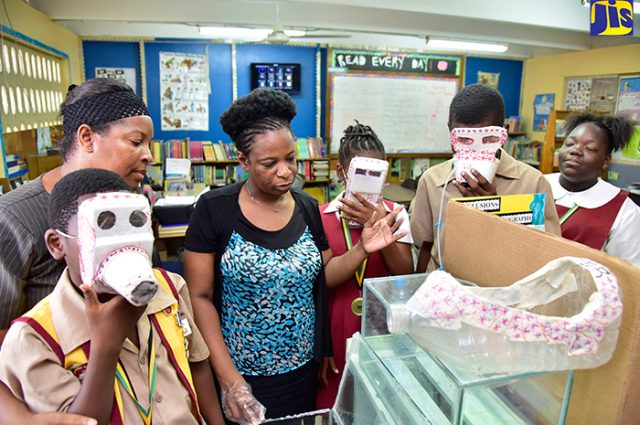 JIS: Seaview Gardens Primary School in Kingston has rapidly gained the enviable reputation of being a cradle for budding young scientists and innovators.

Since 2014/15, this beacon of knowledge and education, which sits majestically in the community for which it is named, has copped the primary school category of the Scientific Research Council’s (SRC) annual National Science and Technology Fair and Competition, with a number of outstanding entries.

That year, the school won with ‘World of Plastic’ – a house created entirely from plastic materials; while in 2015/16, the institution took pole position with ‘Mosquimed’ – an insect repellent made from coconut oil, menthol, eucalyptus leaf extract, guinea hen weed and alcohol, which doubles as a pain reliever.

Seaview Gardens Primary was again propelled to the top spot in 2016/17 with ‘ER’ – an innovatively designed emergency respirator made with styrofoam cups, lunch boxes, cotton and charcoal, and comprising a glass tank, respirator tubes, valves and filter.

The innovation also includes a mobile mask, a biosphere that hosts plants for the generation of oxygen and a collecting reservoir.

In 2017/18, the institution again leapfrogged its age-group rivals with ‘So Real’ – a multipurpose cleaning agent/solution extracted from the sorrel plant.

The win earned the school $200,000 to purchase science equipment, and trophies medals and prizes for the teachers and students.

Principal of Seaview Gardens Primary, Sangieanna Reid Prince, attributes the school’s success to the strong emphasis on the comprehensive and holistic delivery of science to the 790-student population.

“We integrate it across the curriculum in other subject areas,” she tells JIS News.

This focus, she points out, is complemented by activities undertaken through the Young Innovators/Inventors Science Club, which was established in 2007.

She tells JIS News that the science programme is delivered by four teachers, three of whom serve as mentors, while the fourth, Racquel Rose Taylor, is the club’s coordinator.

Mrs. Reid Prince explains that preparations for the SRC science fair and competition commence at the start of each academic year, with club members and teachers/mentors identifying topical issues and challenges and exploring potential solutions.

This approach has contributed significantly to the school’s success over the years, the signs of which were apparent from as early as 2007/08, when the institution first participated.

Mrs. Rose Taylor tells JIS News that the styrofoam sealant project entered that first year earned the school the first runner-up spot and prize for the ‘Best Presenting Team.’ The school got third place for its Solar Multipurpose Food Ware project entry in 2013/14.

Since then, Seaview Gardens Primary has copped four consecutive victories, cementing its legacy in the competition.

Mrs. Rose Taylor says the teachers and students are proud of the ‘So Real’ cleaning product, the idea for which came from observing how clean pots were after being used to prepare sorrel for drinking.

“We conducted our research and discovered that the plant has oxalic, which has cleaning properties… and that products containing this (oxalic) element are manufactured commercially and used to clean (away) rust and mildew, among other surface build-ups. So, in addition to sorrel being used to make drinks and preserves such as jams and jellies, we discovered that we can make this multipurpose cleaner,” she explains.

Mrs. Rose Taylor tells JIS News that the ‘So Real’ agent is used to clean the school’s whiteboards, desks, floors, walls, windows, rails and chairs, noting that “it has so many uses”.

She says the production of other by-products, such as soaps and dish cleaners, is being explored.

Members of the winning team are proud of the innovation and the school’s success in the SRC science competition over the years.

Former head girl, Rihanna Hinds, who will attend Excelsior High School in September, attributes the achievement to the hard work by the students and teachers.

“Science is such a wonderful thing. We have wonderful teachers, who teach a lot about science, so we get many opportunities to do and create many things. My school won because of our excellent performance,” the 11-year-old tells JIS News.

Jadon Willis, who is also 11 and will be attending Wolmer’s Boys’ School in September, says he loves science.

“I am very adventurous… and I really like to explore. That is the main reason why I am so interested in science… because (it covers) a wide variety of things. You can think of something… and there is always a possible way to create it,” adds the former Deputy Head Boy and Science Club Captain.

“You get to explore things you never knew before and have mind-boggling experiences and create things that no one knew could happen or that they could invent,” says the 13-year-old, who is on her way to José Martí High School.

She credits her teachers, whom she says have “taught us well”, adding “without them, we wouldn’t have won four years in a row”.

For 12-year-old Akail Black, being a member of the Science Club has encouraged him to do his own experiments at home, such as making television antennas. “I get to explore things in science that I didn’t know before,” he says.

Akail, who will attend Norman Manley High School, says he is “inspired” by the school’s performance in the annual competition, and credits the enthusiasm and dedication of his peers and Mrs. Rose Taylor for her role in preparing them.

Kashif Dwyer, for his part, says that being a member of the Science Club has enabled him to do his own research and present his ideas, pointing out that “everyone has an opportunity to shine.”

The 11-year-old is on his way to Camperdown High School.

The other team members are Janay Williams, who will attend Meadowbrook High School, and Shawn Bull, who will return to Seaview for the 2018/19 academic year.

Mrs. Rose Taylor says she is encouraged by the passion displayed towards science, not just by the club members, but all of the students.

“In these days, for teachers to be able to get students to participate and maintain their interest in science, because they naturally acquire the passion for it, is a plus,” she tells JIS News.

Meanwhile, Mrs. Reid Prince says she is looking forward to “blazing the trail” once again, in the 2018/19 renewal of the SRC Science and Technology Fair and Competition.

“Most definitely! We are going back to the drawing board and we are going to brainstorm in preparation for next year,” the Science Club Coordinator emphatically states.