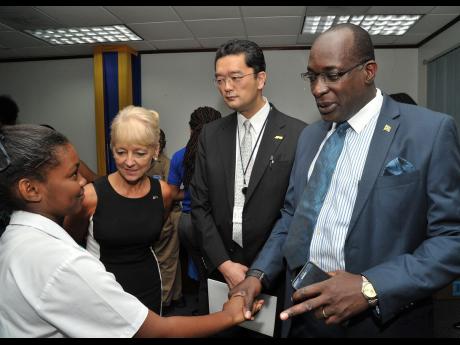 GLEANER : Rather than complex areas of learning far beyond their years, children at the early-childhood level should be focused on developing cognitive and physical capabilities, according to Senator Ruel Reid, minister of education, youth and information.

The minister expressed that the curriculum would require further reform to accommodate such a focus and enable Jamaican students to compete internationally with Asia in mathematics.

“I’m very conscious that you have to begin from simple to complex where young children are concerned. Foundation and simplicity is what we have to work towards, though I know a lot of parents in this current time want the child to learn everything by age six, but that’s not necessary,” Reid told The Gleaner at the Marubeni Mathematics Awards Ceremony held on Thursday at the Jamaica Public Service Company head office in St Andrew.

He added: “Education at this stage, in particular, is about how you validate and motivate students, not necessarily right or wrong. It’s about critical thinking, problem solving and processes, not just the result, as the aim should be to assess you as an individual.

“A lot of innovation that has taken place in the world is trial and error. It’s not that you got the result that you wanted initially. Trying to force the students too early is to just focus on the product and not the process. When they go to the higher level, then you can focus on both the product and the process.”