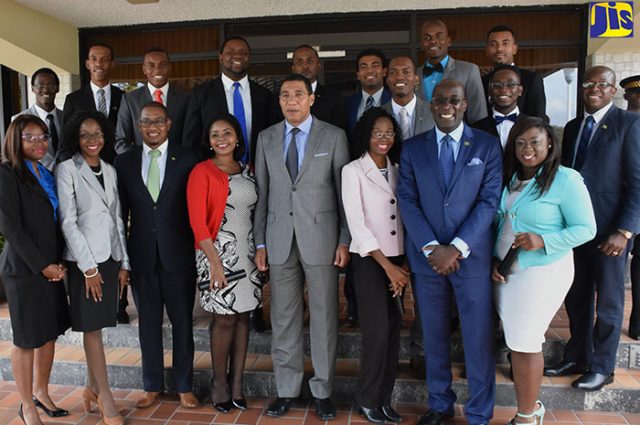 JIS: Sixteen outstanding youth leaders have been selected for the Youth Advisory Council of Jamaica (YACJ), which has been formed to facilitate youth involvement in the policy development and programming actions of the Government.

Speaking at the installation ceremony of the leaders, at the Office of the Prime Minister, in Kingston, on November 22, Prime Minister, the Most Hon. Andrew Holness, said youth must be given full and equal partnership in the decision-making process of Government, so that the outlook of the future is more reflective of the world in which they reside.

“This is something that we believe in firmly. I strongly believe that the youth of Jamaica must be at the centre of Jamaica’s development plans if we are to secure the nation’s prosperity,” he said.

Mr. Holness emphasised that the Government is committed to supporting the development of the nation’s youth, and the installation of the leaders to the YACJ represents a key national development strategy.

The Prime Minister noted that young people, who represent a significant part of the population, will play a role in how Jamaica and the rest of the world adapt to the many challenges that exist, such as climate change.

He said that the positive contributions of the youth will always be valued because they are vital to Government’s plans.

“They are the change agents and need to play a direct role in shaping and influencing the policies that will affect them. It is important that their voices are heard,” the Prime Minister said.

“I charge you to help us change society. Together we’re going to build this country. You share our collective goals and dreams for a prosperous Jamaica,” the Minister told the young people.

He also urged them to support the National Values and Attitudes Programme, which is to be launched soon.

For his part, Minister of State in the Education, Youth and Information Ministry, Hon. Floyd Green, said the launch of the YACJ is the fulfilment of a dream to enable the youth to guide the plans of Government.

The State Minister urged the 16-member Council to plan not only for the future, but also for the present.

In his reply, Chairman of the YACJ, Aubrey Stewart, said the youth leaders accept the mantle of national leadership and will take the position seriously.

“We are meaningful and ready for action in this country. We believe that we can achieve more… (and) we are committed to growing this nation. We accept this challenge,” he said.

Mr. Stewart noted that the 16 youth leaders represent not only the voice of young people who are apathetic, hopeless, vulnerable and disabled, but also those who are enthusiastic.

The YACJ is being coordinated with the intent to facilitate dialogue between young people and all ministries, departments and agencies.

Its structure is geared towards the fulfilment of Goal IV of the Caribbean Community Youth Development Goals (CYDGs), which seeks to ensure and enhance participation in all levels of decision-making, programme implementation and oversight.

The YACJ also acts as Steering Committee for the National Youth Parliament towards ensuring that the deliberations of the Parliament are presented to, and discussed with the relevant decision-makers.

It is expected that for the 2016-2017 period, the Council will focus on achieving its objectives in relation to the Ministry of Education, Youth and Information as well as its departments and agencies

CAPTION: Prime Minister, the Most Hon. Andrew Holness (centre); Education, Youth and Information Minister, Senator the Hon. Ruel Reid (second right), and State Minister in the Education, Youth and Information Ministry, Hon. Floyd Green (third left), with the 16 members of the Youth Advisory Council of Jamaica (YACJ), at the installation ceremony, held at the Office of the Prime Minister, in Kingston, on November 22. At right (second row), is State Minister in the Ministry of National Security, Senator the Hon. Pearnel Charles Jr.

Curriculum and Support Services arm of the Educational Services Division develops plans, organizes, directs, coordinates input, and evaluates the curriculum for the Primary and Secondary levels. In addition, the section coordinates the activities of related units by exercising overall responsibility...
read more