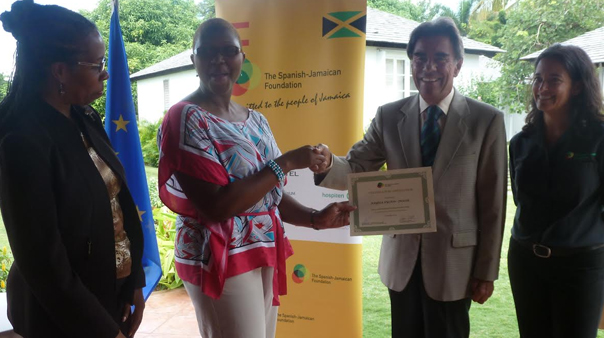 The Spanish-Jamaican Foundation (SJF) is pleased to announce the winner of its inaugural SJF Spanish Teacher of the Year Award – Mrs. Kadia Hylton-Fraser of St. Jago High School. Mrs. Hylton-Fraser, a Jamaican Native, is a graduate of the University of the West Indies and The Shortwood Teachers’ College. She also holds a Masters
Degree from the University of Technology. She has been teaching Spanish for 15 years.
The SJF in collaboration with the Jamaica Teaching Council and the Ministry of Education launched this award during Education Week in May, 2014. Nominees were judged based on the following criteria:
In handing over the award to Mrs. Hylton-Fraser, His Excellency, Spanish Ambassador to Jamaica and President of the SJF, Aníbal Jiménez Abascal, explained that the rationale behind the award was to not only promote the importance of studying Spanish – a foreign language fast becoming the language of business in this region- but also to
recognize a Jamaican who has excelled at the teaching of the language.
According to General Manager of The SJF, Dr. Rebecca Tortello, “this year the competition was very close as all 4 nominees showed a great passion for the language and strong content and classroom management skills. We see this as a very positive development for the teaching of the Spanish language in Jamaica.
Mrs. Hylton-Fraser was pleased to receive her prizes worth over JD100,000 (which include a computer tablet and a day pass to Grand Palladium for herself and a guest) from the Spanish Ambassador at a special luncheon held in honour of all SJF Spanish teacher of the Year nominees at the Ambassador’s Norbrook Residence on Wednesday
November 5th : “I am honoured and humbled to receive this recognition,” she explained, promising to continue to do her best to make Spanish “come alive” for her students.
Established in 2006 by Spanish investors The Spanish-Jamaican Foundation emphasizes educational, cultural, environmental and community development initiatives. In particular, the SJF has made support for the teaching of Spanish as a foreign language a priority. This award will be given annually.
Photo 1:
Elaine Foster-Allen, Permanent Secretary, MOE, Kadia Hylton-Fraser, SJF Spanish Teacher of the Year (St. Jago High School), H.E. Aníbal Jiménez Abascal, SJF President and Dr. Rebecca Tortello, SJF General Manager
Photo 2:
Dr. Rebecca Tortello, SJF General Manager, Ronneka Fraser-Green, Nominee (Wolmer’s Boys School), Elaine Foster-Allen, Permanent Secretary, MOE, Lola Francis, nominee (Meadowbrook High School), Connie Reid-Neil, nominee (Campion College), Sandra Swyer-Watson, Principal (St. Jago High School), Kadia Hylton-Fraser, SJF Spanish Teacher of the Year (St. Jago High School), H.E. Aníbal Jiménez Abascal, SJF President, Martha Corbett-Baugh, Senior Education Officer, MOE, Lebert Drysdale, Education Officer, Jamaica Teaching Council, Dr. Winsome Gordon, CEO, Jamaica Teaching Council 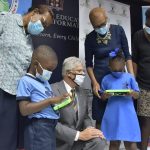 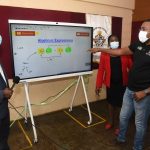 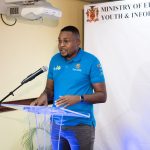