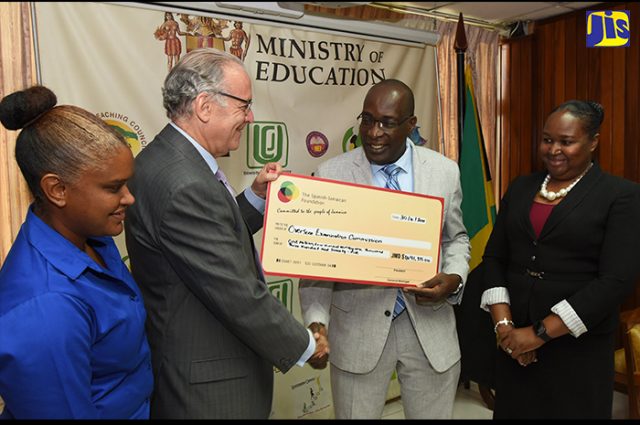 The students are from schools in regions three and four of the Ministry of Education, Youth and Information.

“The Spanish-Jamaican Foundation, certainly, has been an organisation that has been extremely supportive of our foreign-language programmes,” he said.

“The overall support for the country has been outstanding. This is another demonstration of that commitment,” he added.

Minister Reid noted that the students who will benefit reside in communities that are in proximity to Spanish-owned hotels, which serve a large number of the tourists who visit Jamaica annually.

As potential future employees of these hotels, he said it is important for the students to have competencies in both English and Spanish.

Additionally, he pointed out that Jamaica is surrounded by numerous Spanish-speaking countries that are open to trade, and interpreters are needed to make the connections.

“It is important, I believe, that we are competent and fluent in the speaking of the Spanish language, because there are so many trade opportunities with Latin America and Spain,” he said.

“This, what you are doing here, is an investment in Jamaica’s long-term development, ensuring that Jamaica can participate in this globalised economy. This is an outstanding contribution and investment in the education and empowerment and people of Jamaica,” he added.

In his remarks, Ambassador Bessa said that if more Jamaicans become competent in Spanish, this could boost the country’s tourism sector.

“Spanish language is very important. If you look at the tourism industry, Spanish is a leading partner. For many of the Jamaicans trying to get a better opportunity with jobs in the sector, Spanish will become, more and more, an important tool, because the tourists will have to move from one destination to another [and there will be the need for communication],” Mr. Bessa said.

“There are many economic and trade [opportunities] depending on your ability. Spanish means jobs, Spanish means opportunities, business, and I think it’s a very wise decision to become a bilingual country,” he said.