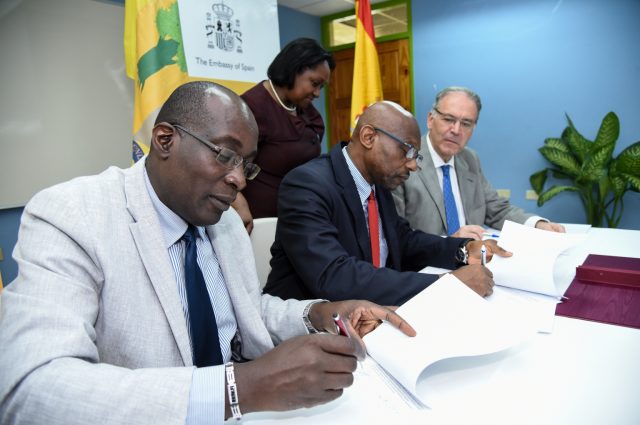 JIS: Shortwood Teachers’ College has signed a Memorandum of Understanding (MoU) with the Spanish Agency for International Development Cooperation (AECID) for the provision of a specialist lecturer in Spanish to bolster the College’s Foreign Languages Department.

The lecturer, who is a native of Spain, is slated to commence duties in the 2018/19 academic year, and will be assigned to the College for three years.

Under the MoU’s tenets, the Government of Spain will cover the lecturer’s monthly salary and transportation costs. The College will provide accommodation and a stipend to complement the salary.

Proposed cultural activities to be organized by the lecturer in collaboration with the College and the Embassy of Spain in Jamaica are also part of the MoU’s provisions.

The undertaking aims to support the Government’s goal of encouraging more Jamaicans to learn Spanish, by boosting their exposure to the language.

Senator Reid said a key objective of the MoU is strengthening educators’ capacity to teach Spanish, particularly at the early childhood level.

He argued that fulfilling this goal is contingent on the availability and deployment of sufficient cadre of adequately trained teachers of Spanish in the system.

The Minister also described the collaboration as an important first step to Jamaica becoming multi-lingual.

“Jamaica needs to empower our human resources so that we can become a multi-lingual nation and compete in all areas of trade internationally,” he said.

Noting that several neighbouring countries, including Cuba and Hispaniola, are predominantly Spanish speaking nations, Senator Reid said the partnership will assist in reducing communication barriers with these and other territories and boosting trade, among other engagements.

“There are over 800 million Spanish speaking (people in) countries in the Western hemisphere that we do very little trade with. The potential (benefit of these markets for Jamaica) in terms of tourism and bi-lateral trade… is significant,” he pointed out.

Senator Reid said the MoU forged is another signal of the “close ties between our countries.”

“Spanish is the international language of business trade, commerce and industry. This initiative will benefit the Shortwood Teachers’ College and by extension, our education system immensely,” he added.

Meanwhile, Ambassador Bosch Bessa said Spain stands ready to assist in the development of Spanish as a second language in Jamaica.

Noting Jamaica’s strategic location in proximity to the main shipping lanes between the Far East, Europe and North America, as well as to trade and air routes spanning the Americas, Europe and the Caribbean, he said making Spanish one of the main languages in Jamaica will create more opportunities to expand into diverse trade markets.

“Your geographical position makes you a natural bridge between Latin and North America… between Spanish and English speaking countries. You have the possibility of becoming the logistics and communications hub of the Caribbean,” the Ambassador stated.

CAPTION: Education, Youth and Information Minister, Senator the Hon. Ruel Reid (left), signs the Memorandum of Understanding (MoU) forged between the Shortwood Teachers College and the Spanish Agency for International Development Cooperation (AECID) for the provision of a specialist Spanish lecturer for the institution. Also signing are College Principal, Dr. Christopher Clarke (centre); and Spain’s Ambassador to Jamaica, His Excellency Josep Maria Bosch Bessa (right). Looking on is Senior Lecturer in the College’s Modern Languages Department, Aracelis Duffus-Anedu. The signing ceremony was held at the College’s Shortwood Road campus in St. Andrew on March 15.