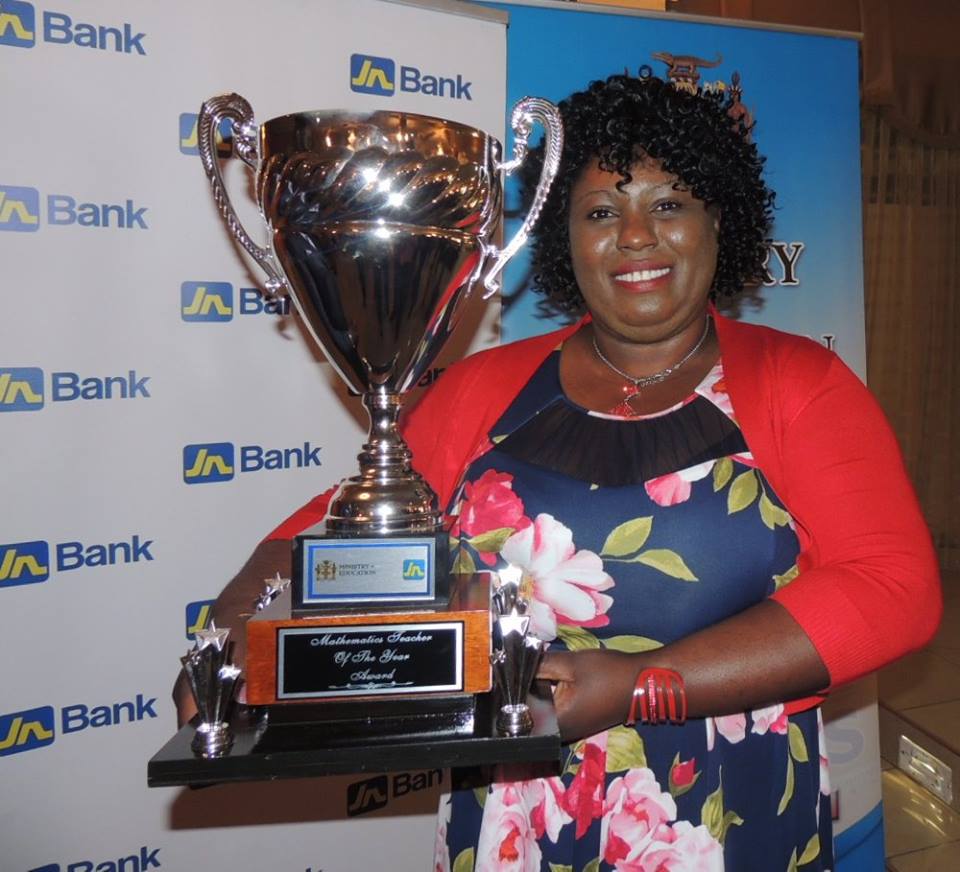 OBSERVER: Stacey Taylor of Hatfield Primary and Junior High School in Manchester is the 2018 National Mathematics Teacher of the Year.

The announcement was made at Mona Visitors’ Lodge in St Andrew, on Wednesday, March 28.

Taylor was chosen from a list of 17 regional finalists and five national finalists. A total of 63 primary and secondary school teachers from across the six education regions were nominated for the award.

“I am elated. There are no words to explain how I feel at this moment,” she declared following the awards ceremony. “This is a coveted award which so many persons competed in, therefore, it’s an amazing feeling to be announced as the winner.”

The Manchester native, who has been an educator for more than 18 years, said she believes she was born to teach.

“Being a teacher is my calling. My students’ learning is my main focus and passion. Through my guidance they are now able to understand that mathematics is not only about numbers, calculations and algorithms, but it is also about thinking, reasoning and understanding,” she said.

As part of the prize package, Taylor received a one-year membership in the National Council of Teachers of Mathematics (NCTM), which is the world’s largest organisation focused on mathematics education, and an all-expense-paid trip to Washington, DC, in the United States of America to attend the 2018 NCTM Conference. She also received an iPad courtesy of the JN Bank, which sponsors the teachers’ competition.

Addressing the awards function Wednesday, Minister of Education, Youth and Information Ruel Reid said the teaching profession in Jamaica has come a far way. He noted that while the country is not yet where it should be in terms of all teaching outcomes, there is still much for which we should be proud.

Senator Reid outlined that the Ministry of Education continues to improve teacher training, as part of its efforts to create a solid foundation for learning.

Jacqueline Robotham, business relationship and sales manager at JN Bank, congratulated the education ministry and its Mathematics Unit for its work over the years to improve the teaching and learning of maths in Jamaica.

“Through the efforts of our maths teachers and the support systems of Dr Tamika Benjamin, national mathematics coordinator, and her team, much has been accomplished to raise the bar of competence in this subject,” Robotham said.

She also highlighted programmes implemented by the Jamaica National Group, such as the Centres of Excellence, in concert with the Victoria Mutual Building Society, and the JN iLead initiative, to focus on upgrading leadership and academic performance in rural and non-traditional schools.

“We understood from the inception of those programmes that it would take some time for us to see signs of improvement. Therefore, we are pleased that the green shoots are emerging as a result of the many years of teaching, leadership, coaching and capacity building,” the JN senior manager stated.

Robotham also encouraged teachers not to be satisfied with the two-and-a-half per cent improvement in maths passes in the past year, pointing out that “our students are still performing below the standards of many others around the world”.

“We must, therefore, keep the momentum going and make the subject of mathematics relatable and alive,” Robotham urged.

The National Mathematics Teacher of the Year Award is in its fifth year.

CAPTION: Stacey Taylor of Hatfield Primary School in Manchester is shocked on hearing the announcement that she is the 2018 National Mathematics Teacher of the Year. The award was presented at Mona Visitors’ Lodge in St Andrew on Wednesday. (Photo: Courtesy of JN)