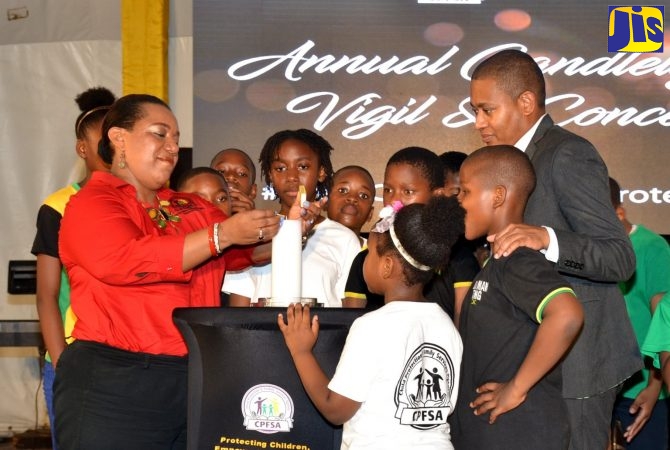 JIS: State Minister in the Ministry of Education, Youth and Information, Hon. Floyd Green, has reiterated his appeal for Jamaicans to report cases of child abuse.

“The anti-informer culture needs to end,” he said, noting that the lives of vulnerable children are at stake.

“I want to encourage more of us to speak when we know that a child is being abused. That’s the first step to really end child abuse and to ensure that every child gets protection. We have to speak up, and quite frankly, too many of us are still remaining silent.

“You know of the vicious crimes that we have been faced with very recently involving our children. It’s even more difficult when you see the reluctance among members of communities to speak what they know, to ensure that the perpetrators are brought to justice,” he lamented.

“Talk about children being abused. [We need] more people, who are willing to not put up with the neighbour who you know is abusing a child… . That is what we have to treat with, if we really believe that every child deserves protection,” he added.

The State Minister was speaking at the Child Protection and Family Services Agency’s (CPFSA) 12th annual Candlelight Vigil and Concert at Emancipation Park on Monday (November 19). The event was held to focus national attention on the issue of child abuse and the importance of protecting the nation’s children.

The CPFSA’s Chief Executive Officer, Rosalee Gage-Grey, said children have a special place in the society and need the care and protection of citizens.

She cited statistics from the Jamaica Constabulary Force (JCF), which show that 70 children died under violent and tragic circumstances for the period October 2017 to October 2018. These include 50 males and 20 females, aged two to 17 years.

“The loss of these 70 children is a loss of 70 opportunities to build a better Jamaica; 70 less graduates from our prestigious universities and 70 hopes lost,” Mrs. Gage-Grey said.

On November 19 each year, the CPFSA joins countries around the world in observing World Day for the Prevention of Child Abuse by staging a candlelight vigil and concert.

This year’s event, under the theme ‘Every Child Deserves Protection’, included the ceremonial lighting of a candle and pinning the names of every child killed across the island over the 12 months on a large map of Jamaica mounted at the venue.