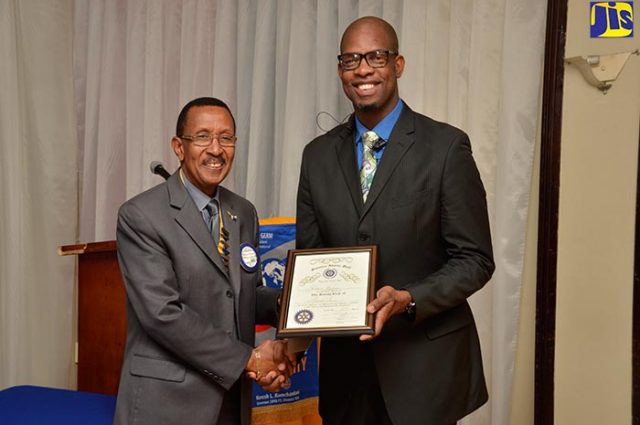 JIS: The Ministry of Education, Youth and Information is reporting steady pass rates in the number of students who sat Mathematics and English in the Grade Six Achievement Test (GSAT) over the past four years.

Mr. Miller was addressing a meeting of the Rotary Club of Spanish Town on September 27, at the Police Officers’ Club on Hope Road, in Kingston.

The Senior Advisor also pointed to improvement in the number of students achieving mastery in literacy and numeracy at the primary level.

“Jamaica has done well in the provision of basic education. Today we have universal access at the early-childhood, primary and secondary levels of our education system. This is no flimsy achievement,” he emphasised.

Mr. Miller encouraged the Rotarians to redouble their efforts to help create a world-class education system, “which enables every Jamaican who wishes to achieve his or her potential”.

The achievements by the students are in line with the focus of Rotary International, which is celebrating the month of September under the theme ‘Basic Education and Literacy’.

President of the Rotary Club of Spanish Town, Desmond Hutchinson, said that as part of activities being undertaken in September, the club donated books, school bags, pencils and crayons to the National Basic School in Spanish Town.

They will also be establishing a reading room/computer room at the Spanish Town High School at an estimated cost of $4 million. It is expected that the facility will be completed by the end of the year.

CAPTION: President of the Rotary Club of Spanish Town, Mr. Desmond Hutchinson (left), presents a plaque to Senior Advisor to the Minister of Education, Youth and Information, Mr. Robert Miller, after he addressed the club’s meeting on September 27 at the Police Officers’ Club in Kingston.