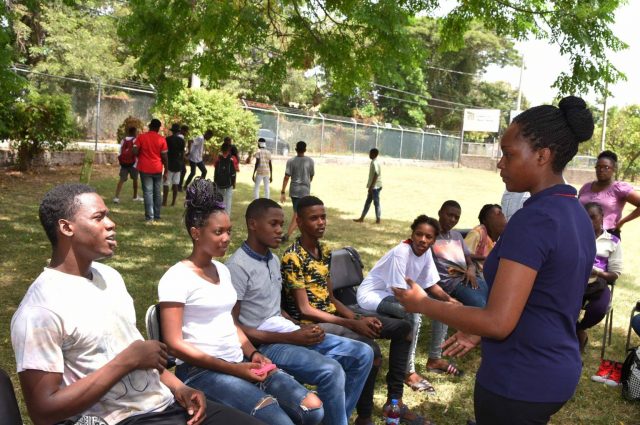 JIS: The Supervised School Intervention Programme by the Dispute Resolution Foundation (DRF) was born out of concern for the wellbeing of youngsters who have been suspended from school and were often observed partaking in idle activities for the suspension period.

The initiative, brainchild of DRF Network Manager Sharon Young Palmer, was started at the Foundation’s Spanish Town Peace and Justice Centre in 2006 and later expanded to the peace and justice centres in St. James, Clarendon, St. Catherine and Kingston.

“I conceptualized the Supervised School Intervention Programme because it was my observation that students were suspended from school and were sent home for a period, but they had no treatment for what led to the suspension and so the behavioural problems continued,” Mrs. Young Palmer said.

“So I thought it would be good to have a programme that would assist the youths in understanding their responsibility as young citizens and as students. It was about us just helping them to understand their responsibilities better and to know what they need to do to become good and productive citizens,” she added.

She said that the initial stages of the programme highlighted the root cause of certain antisocial, maladaptive and disrespectful behaviour which usually leads to suspension of students.

These included underlying challenges from circumstances such as loss of a parent, untreated trauma, parental separation, as well as academic and intellectual difficulties at school.

“It became necessary for us to solicit support from guidance counsellors in the schools. They would volunteer an hour or two and they would be matched with students from schools other than their own and gave great assistance in treating some of the conditions,” Mrs. Young Palmer said.

Students doing practicum in social work and guidance counselling were also engaged as a part of the programme to help to identify, treat with the challenges and make referrals.

She further noted that a component of the programme is geared at rapport building, achieved through techniques introduced in the playing of games such as chess and dominoes.

“So you help them learn how to get along with each other, to have friendly rivalry, to learn how to lose…to understand that you don’t have to win all the time but you can be a good sport,” Mrs. Young Palmer said.

Art classes, done through support from volunteer teachers, is also used as a form of therapy to help the youngsters.

She said the programme also conducts parenting sessions to ensure parents have a clearer understanding of the experiences of their children and are prepared to provide support.

“One thing we do is say to the students that this is their place, their home away from home. They are always welcomed and are encouraged to come by after school, where they can socialize with each other,” the Network manager said, adding that during these visits, facilitators can interact with the students and assess progress.

One 13-year-old Windward Road Primary and Junior High School student who was suspended after getting into a fight hailed the programme for helping her deal with her anger problems, and teaching her ways to prevent conflict with her peers.

A 15-year-old Haile Selassie High student, who was twice suspended and became a part of the programme, further noted that the initiative helped her to manage peer pressure and make better decisions.

“When I came to the Foundation and I told them what happened, I think they were able to look at it in a different way and help me deal with it,” she said in an interview with JIS News.

Approximately 5000 students have been engaged in the programme at the all the centres combined.

“I am really feeling good. I am satisfied that we introduced this programme to the schools and the wider community…and it’s heart-warming and I am motivated to continue. When you have students coming in now who can say how good the programme was for them and how it helped them make the decision to change their behaviour, [that is very meaningful],” Mrs. Young Palmer said.

The Citizen Security and Justice Programme III (CSJPIII) provides support for the programme, including meals and transportation for participants.

CAPTION: Youngsters participate in a group discussion at a Dispute Resolution Foundation summer camp in Kingston in July.