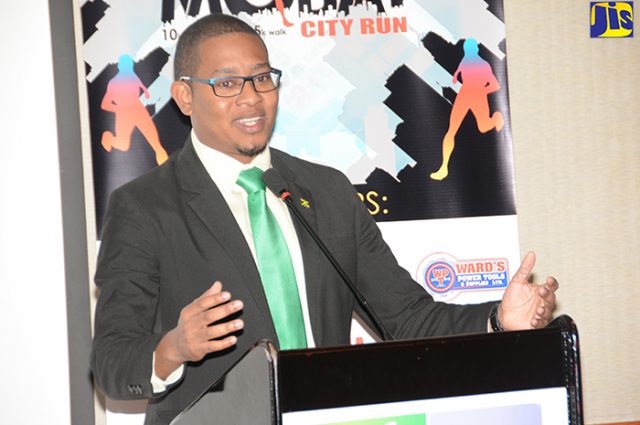 JIS: Minister of State in the Ministry of Education, Youth and Information, Hon. Floyd Green, says the job market has become very competitive and students should now be guided as it relates to careers they pursue.

The Minister, who was speaking at the media launch of the MoBay City Run on March 21 at the Holiday Inn Hotel, St. James, said this has taken on special significance, so as to ensure that students graduating from tertiary institutions are able to find jobs in their areas of speciality.

“One of the frank discussions that we must have as a country is that just pursuing a degree is not enough. This is especially so if at the end of the day the currency of that degree is not of a value that can be utilised,” the State Minister said.

Mr. Green said he is cognisant that it might not be a popular or a politically correct discussion, but is “one whether we like it or not, that we will have to have”.

“There are a number of students who have gone on to pursue tertiary education, and when they come out, they are oftentimes frustrated. They are frustrated because the courses that they have pursued in that field of endeavour do not lend themselves to jobs that are open. What you often find is that those areas are saturated,” the State Minister pointed out.

He noted that there are a number of areas that are badly in need of qualified personnel and urged students to explore courses that will make them marketable once they finish school.

The State Minister said there are some institutions where 97 per cent of their tertiary graduates are placed in jobs upon completion of their courses, and there are other institutions with rates that “we wouldn’t want to talk about”.

“We have to do some realignment in the tertiary sector. We have started the discussion where we have appointed some youth advisors to advise us on some of the tough decisions we will have to make in our Ministry,” he said.

The Minister said the advisors have been asked to look at the funding model of the tertiary institutions, as “we are in a climate where resources are scarce and we really have to look at how we prioritise those resources”.

“They have submitted their recommendations and we will be looking at them. We will engage our universities and community colleges in that discussion, to find out if we are adequately aligning our funding of tertiary education,” he said.

Meanwhile, Chairman of the organising committee, Janet Silvera, said everything is in place to ensure that this will be the biggest Montego Bay City Run yet.

“We are expecting to have approximately 4,000 participants, up from the 3,000 we had last year. We have some very good sponsors on board, and there is a great deal of enthusiasm in the communities across the region,” she said.

CAPTION: Minister of State in the Ministry of Education, Youth and Information, Hon. Floyd Green, addressing the media launch of the 3rd annual Mo Bay City Run at the Holiday Inn Hotel in St. James on March 21.