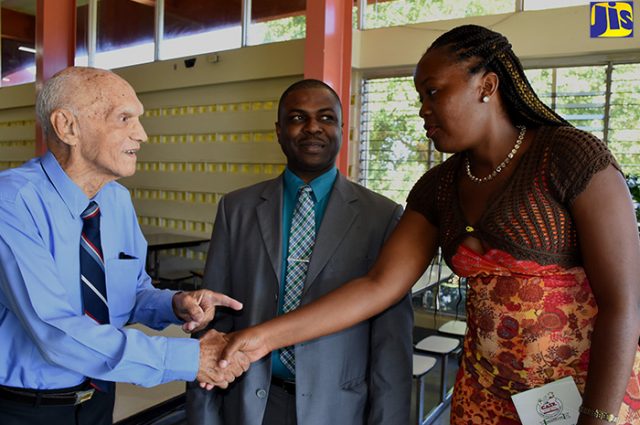 JIS: Minister of Education, Youth and Information, Senator the Hon. Ruel Reid is urging students to pursue academic studies and professions in non-traditional areas, such as agro-science.

He made the call during a founders’ day ceremony at the College of Agriculture, Science and Education (CASE) campus located at Passley Gardens, Portland on January 28.

“The world of ago-science offers a multitude of career opportunities that should be grasped with both hands. As we move to understand the past and current trends in agriculture, we see that science and technology are crucial components to be used more efficiently if some of the opportunities are to be utilised,” he said in a message ready by Education Officer, Lebert Drysdale.

Minister Reid said the Government is creating the enabling environment to guide students in exploring career paths other than the traditional professions of law and medicine.

“New training opportunities as in the Career Advancement Programme, the thrust towards the Occupational Studies degree programme and the offerings of the Caribbean Maritime Institute (CMI)…are helping our young people to see that there are different paths of achieving individual prosperity and national development,” he said.

He added that students need not be locked in traditional perspectives that seem to limit or stymie their interest and capabilities.

In the meantime, Mr. Reid said the achievements of the College of Agriculture, Science and Education should serve as inspiration to all.

He said while the school was founded to train just a handful of young men in the “art and science of agriculture”, it has grown well beyond that and now have bigger and bolder visions.

Senator Reid added that in the first decade, the school had among its illustrious graduates, Dr. T. P. Lecky, an animal geneticist who became world renown after developing the Jamaica Hope and Jamaica Black breeds of cattle.

“We need more Dr. Lecky’s in Jamaica. And we need others who will see the opportunities that lie in the linking of traditional areas of training to the new and changing demands of the workplace. Of course, we will have to do that while making use of the still evolving world of information, communication technology,” he said.

The Education Minister also stated that the Ministry considers the work of the institution integral to its mission of providing high quality care and education in an innovative, inclusive and enabling environment thereby creating socially conscious and productive Jamaicans.

CASE is the only tertiary institution dedicated to the training of students in the art and science of agriculture and allied discipline.

The ceremony commemorated the 107th anniversary of the founding of the Government Farm School on January 25, 1910.