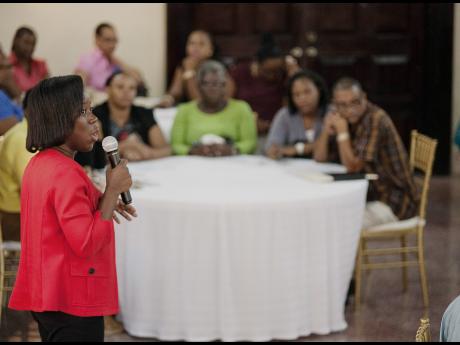 GLEANER: The Catherine Hall Primary and Infant School is the latest in a series of schools to benefit from an initiative by the Citizen Security and Justice Programme (CSJP) III aimed at building the capacity of school administrators, guidance counsellors, and academic staff to offer support to behaviourally challenged students.

Forty-three members of staff from the Montego Bay, St James-based institution, including the principal, vice-principal, and the school’s dean of discipline, turned out for a workshop geared at the development of cognitive skills and curbing at-risk behaviour last Thursday at the Sea Garden Hotel in the Second City.

Psychological Services Coordinator with the CSJP III Dr Melva Spence said that the programme, which started in 2016, came about out of realisation that there was a high number of referrals to the psychological services unit by schools due to poor behaviour of students. It was also a response to increasing numbers of incidents of violence in schools.

“The referrals were overwhelming, and when we do the assessment with them, many of the times, it’s due to grief or anxiety from separation, trauma, or depression, which displays itself as misbehaviour,” she said.

Spence said that Thursday’s workshop focused on helping teachers and administrators understand how to support students in expressing emotions and how to reflect on the basis for their actions.

“I think the teachers must take more time to process what is going on with the children as [sometimes] the child doesn’t necessarily want to misbehave or to fight, but the emotions that they are feeling, they are not processing them properly, and so it comes out that way. So that’s what we want to achieve, [an environment] where teachers are better able to interact with the students, understand what they are going through, and assist them,” she explained.

Stacey-Anne Whittingham-Tucker, psychologist with the Citizen Security and Justice Programme (CSJP) III, said the hope is that last Thursday’s workshop for teachers, geared at the development of cognitive skills and curbing at-risk behaviour, will have an impact the wider school community. The training session was held at the Sea Garden Hotel in Montego Bay, St James.

“Some of the teachers say that they were not aware that some of the behaviours displayed by students were due to mental challenges, and knowing this, staff would now be able to approach it in a different way, and they are appreciative of it. We are happy we can help in that way as we understand that if these problems are not solved, it can lead to students becoming dysfunctional members of society,” he said.

Principal of the Catherine Hall Primary and Infant School, Dudley James, described the session as informative and engaging. The school is the latest in a series of institutions to benefit from the initiative.

“The information that we gleaned from the workshop will be quite useful in the classroom as it looks at the child’s whole cognitive development and at how best we can look at the child’s thought processes and see what strategies we can apply to curtail certain behaviours. For me it is a very important workshop,” he said.

Representatives from the Dispute Resolution Foundation and the Restorative Justice Unit also delivered presentations to the participants, featuring ways in which schools can access services.

CAPTION: Psychologist with the Citizen Security and Justice Programme (CSJP) III, Stacey-Anne Whittingham-Tucker, delivers a presentation to a group of teachers and administrators from the Catherine Hall Primary and Infant School, during a capacity-building workshop at the Sea Garden Hotel in Montego Bay.