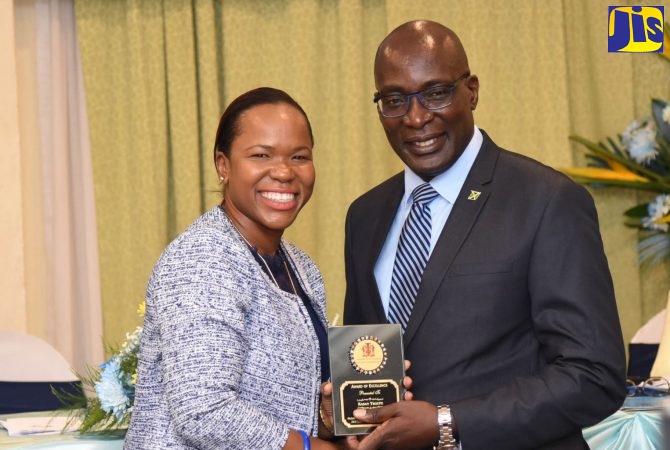 JIS: Top achievers in the Ministry of Education, Youth and Information who received overall performance scores of 90 to 100 per cent during the 2017/18 fiscal period were recognised for their achievement.

They were recognised during the fourth staging of the Performance Management and Appraisal System (PMAS) rewards ceremony, held at The Knutsford Court Hotel in New Kingston on December 4.

“Continue the good work, and be assured that we appreciate all your efforts, all your sacrifice, all your hard work, commitment and loyalty. Nothing that we can achieve as a Ministry can occur without you,” he said.

Senator Reid noted that while the Ministry continues to excel, there are areas which can be improved.

“There are some processes that we have to improve to ensure we deliver better customer service, but a lot of that will be ICT solutions in terms of how we are able to communicate to our stakeholders more effectively, how we are able to provide services from the regions online in real time, so we drive more efficiency,” he said.

Guest speaker at the function, President, Guardian Life Insurance Company, Eric Hosin, encouraged the recipients to continue striving for excellence. “Keep improving on who you are… . Whatever you do, do it well,” he said.

Senior Director, Human Resource Management and Development, in the Ministry, Iolyn Donald, informed that PMAS for employees is one of the initiatives designed and introduced by the Office of the Cabinet to foster improved work practices and behaviours throughout the public sector.

“We commend them for their diligence, professionalism and strong work ethic as they sought to exemplify Government at your service to our various customers and stakeholders,” she said.

The Ministry, in pursuit of a performance-driven culture, implemented the PMAS during the 2014/15 fiscal year.

The programme accords recognition and rewards to staff members who have obtained performance scores of 80 to 100 per cent classified in three categories – levels one, two and three.

A review of the staff performance data for the 2017/18 fiscal period revealed a 22 per cent increase in compliance levels.

Letters of commendation are issued to level-one performers, while the level-two and three achievers are hosted at an annual awards ceremony each year.

CAPTION: Minister of Education, Youth and Information, Senator the Hon. Ruel Reid (right), presents a plaque to Director of Regional Educational Services, Region One, Dr. Kasan Troupe, during the fourth staging of the Performance Management and Appraisal System (PMAS) awards ceremony, held at The Knutsford Court Hotel in New Kingston on December 4. During the ceremony, persons were recognised for their outstanding performance during the 2017/18 period.