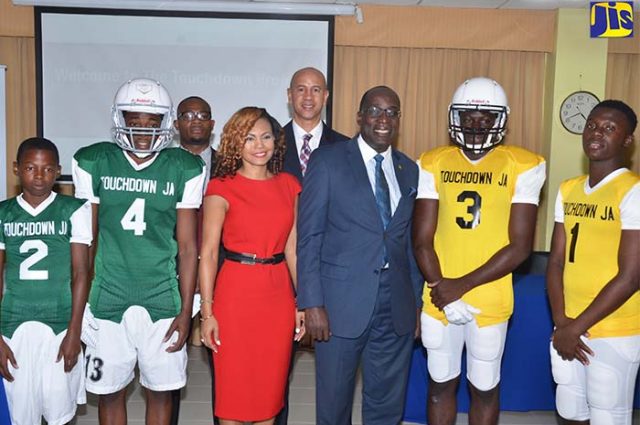 JIS:  The Ministry of Education, Youth and Information in collaboration with the Jamaican American Athletic Development (JAMAAD) Incorporated have launched a new sporting initiative called ‘The Touchdown Project’.

It will be rolled out in 16 Schools Island wide as of September 2017 and will be used as an avenue for the introduction of American Football in local schools.

The sporting initiative is seen as another way through which Jamaican youth, with right guidance and coaching can develop their full potential and excel in another arena.

Speaking at the launch of the project Minister of Education Youth and Information, Senator the Hon. Ruel Reid said a careful selection process was used to choose the 16 schools in order to facilitate a league format with eight teams in each conference

Schools were selected based on having a suitable playing field and a record of being listed in the top 50 high academic performers. Any child from the Parish can play for the team, and the school will act as the home base for that Parish.

Senator Reid said that this decision was taken to ensure that the programme is accessible to the all high school students across the island.

“Jamaicans living in the United States have indicated that great scholarship opportunities can be derived from this and other sport programmes and we believe these opportunities should be explored,” he said at the launch held on March 23 at the Overseas Examination Commission in Kingston.

Students from grades seven to twelve who are in good academic standing will be eligible to participate in the student athlete programme.

The programme will be fully funded by JAMAAD and its affiliates. Additionally, the project has been warmly received by the Jamaican Diaspora, who have provided some US$800,000 in funding for certain aspects of the initiative.

The sum will cover the cost of procuring safety equipment and gear and other associated expenses at no cost to the Government of Jamaica or the participating schools.

In the first phase of the initiative, a comprehensive training programme for local coaches is being developed as an introduction to the basic principles and rules of American Football.

The coaches will receive certification and training and will work with American coaches and industry professionals to develop the sport in Jamaica.

In phase two, focus will be placed on the recruitment of potential student athletes through a series of fitness and agility camps.

Meanwhile, Minister of Culture Gender Entertainment and Sports, Hon. Olivia Grange said the youth represent vibrant possibilities for national development and that the project will empower young people to realize their full potential.

She noted further that the project will introduce core American sports to Jamaica’s youth, enabling them to pursue goals and dreams by competing globally.

The Minister’s speech was read by Senior Director in the Ministry, Florette Blackwood.

For his part, Director of JAMAAD, Zachery Harding said the project is fully endorsed by both Ministries of Government.

“The Ministry’s role in the project is to act as an interface between the project and the schools. This is a school based project so we have to partner with the schools. They are responsible for the curriculum, the Physical Education teachers and the coaches,” Mr. Harding said.

He further explained that once the programme is integrated into schools, the Ministry of Culture Gender Entertainment and Sports, will coordinate the establishment of leagues and interface with the Inter-Secondary School Sports Association, in implementing the rules and regulations aspect of the programme.

“At the appropriate time, we will also bring in the Jamaica Anti- Doping Commission (JADCO) to educate them, because anti-doping in schools is an important part of the programme,” Mr. Harding stated.

The Touchdown Project is the first of a three part programme which aims to introduce baseball and basketball to the island.

It is anticipated that the development of these sports will assist in positioning Jamaica as the top destination for recruiting professional American sports talent. The initiative is conceptualized and founded by Jamaican born Director of JAMAAD, Nicole Hoyen-Birch.

JAMAAD is a Diaspora U.S. non-profit organization which seeks to ‘Champion the Dreams of Youth Through Sports’.

CAPTION: Minister of Education, Youth and Information, Senator the Hon. Ruel Reid (third right) is pictured with from left, students of the Kingston Technical High School, Javier Grant and Javaughn Rose; Founder and Director of the Jamaican American Athletic Development (JAMAAD) Incorporated, Nicole Hoyen-Birch and Students of the Kingston Technical High School, Rayion Watson and Garfield O’Connor. They were at the launch of the Touchdown Project at the Overseas Examinations Commission in Kingston on March 23. Others in the background are from left: Education Officer for Physical Education in the Ministry of Culture, Gender, Entertainment and Sport, Elton Johnson and Director of JAMAAD, Zachery Harding.

Here are some FAQs that are posed by our stakeholders. Registration Can I register my child in a school without his Birth Certificate? Parents who do not have their children’s birth certificates should: Contact the Registrar General’s Department Present the...
read more