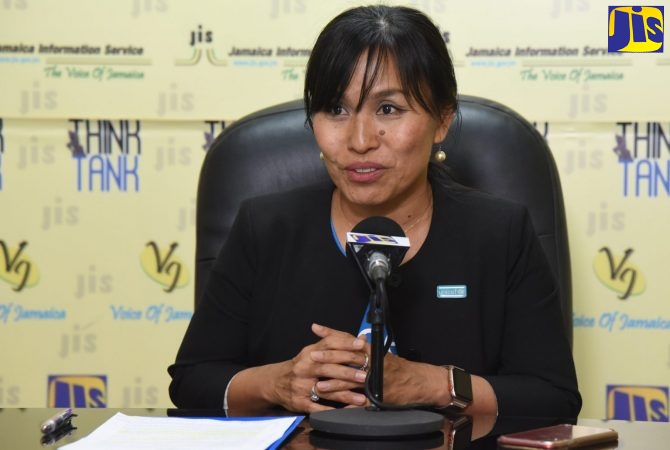 JIS: The United Nations Children’s Fund (UNICEF) will be increasing expenditure under the X Marks the Spot School Crosswalk Campaign being implemented by the Jamaica National (JN) Foundation.

Country Representative, UNICEF Jamaica, Mariko Kagoshima, said that the entity has contributed some $30 million to the road-safety campaign, which was launched at Hazard Primary School in Clarendon last November, and “we are expecting to top up to $100 million”.

“So, it is going to be an important investment to address the issue of road safety,” she said, while addressing a recent Jamaica Information Service (JIS) Think Tank.

Hazard Primary was the first beneficiary under the campaign, which involves the erection of road-safety infrastructure at 18 schools across the island over the next three years.

These include signage, bus lay-bys, pedestrian gates, widening and paving of sidewalks, improving drainage, and painting of crosswalks.

The objective is to create low-speed zones at or near schools or locations with high incidence or risks for road traffic fatalities.

Ms. Kagoshima said that the project has benefited about 1,000 students, to date, and is expected to reach another 5,000 by next year.

She said that through participation in the national Labour Day exercise, “we expect to reach thousands and thousands of children with the same aim to keep the roads safe”.

UNICEF and JN Foundation are partnering with the Ministry of Culture, Gender, Entertainment and Sport on activities for Labour Day 2019, under the theme ‘Child Safety… It’s you, It’s me, It’s all ah We!’

Work at the schools will include the painting of pedestrian crosswalks, installation of signs, construction of chain-link fences, improving entrances, repairing bathrooms, fixing leaking roofs, painting and the de-bushing of the school grounds and entrances.

Ms. Kagoshima said that UNICEF is happy to provide support for the national Labour Day projects.

“We are happy that this year’s Labour Day can be combined with what we have been promoting. We have been working on the X Marks the Spot to ensure children’s safety to and from school,” she noted.