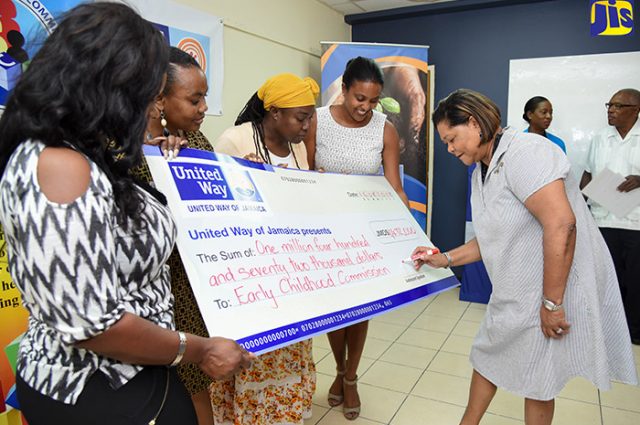 JIS: United Way of Jamaica has provided grant funding of $1.472 million to six basic schools islandwide, which will assist the institutions with their preparations to become certified with the Early Childhood Commission (ECC).

This will result in a total of 396 students and teachers being positively impacted come the new school year in September 2018.

The handover ceremony was held on August 16 at the offices of the National Volunteer Centre, Camp Road, in Kingston.

Board Chairman of United Way of Jamaica, Dr. Marcia Forbes, said the goal is to make the school environment safer and more conducive to learning for the new school year, and to help the institutions meet the standards set by the ECC.

“Early childhood education is a major priority for the United Way of Jamaica. We have continued to support the work in this area by providing safe indoor and outdoor equipment for children and staff,” Dr. Forbes said.

She added that these investments are making a difference and continue to fill critical gaps in alignment with Jamaica’s national development goals.

“We will fight and we will win the fight by creating the opportunities and a platform for our next generation to succeed,” Dr. Forbes said.

For her part, Chairperson of the ECC, Trisha Williams-Singh, said United Way of Jamaica has done a tremendous job of helping to improve the early childhood sector in Jamaica.

“Undoubtedly this contribution of $1.47 million will go a far way in helping all these institutions to attain the 12 legal operating standards. When you think about the funding you receive today that has to do with the perimeter wall, think about the safety of the child,” Mrs. William-Singh said.

She noted that the six basic schools are registered with the ECC and were selected by the United Way of Jamaica, in partnership with the Commission.

“We are very much appreciative of the funding you have given. We deem it a privilege to have been selected and may you continue to reach higher heights as you look after the institutions in Jamaica,” he said.

The United Way of Jamaica was incorporated in January 1985 and is an autonomous non-profit Private Voluntary Organization registered as a Charitable Organization and an affiliate of United Way worldwide.

The organisation brings donors, volunteers, community leaders and other stakeholders together to address pressing needs in the society.

CAPTION: Board Chairman of United Way of Jamaica, Dr. Marcia Forbes (right), affixes her signature to the symbolic cheque for $1.472 million, which will be used to assist six basic schools with their preparations to become certified with the Early Childhood Commission (ECC), during a ceremony held at the offices of the National Volunteer Centre, Camp Road, in Kingston, on August 16. Observing (from left) are: Principal, Sanguinetti Early Childhood Institution, Diana Douse; Principal, Nutshell Basic School, Eunice Johnson; Chairman, Nutshell Basic School, Yulanda Goehagon; and Chairperson of the ECC, Mrs. Trisha Williams-Singh.