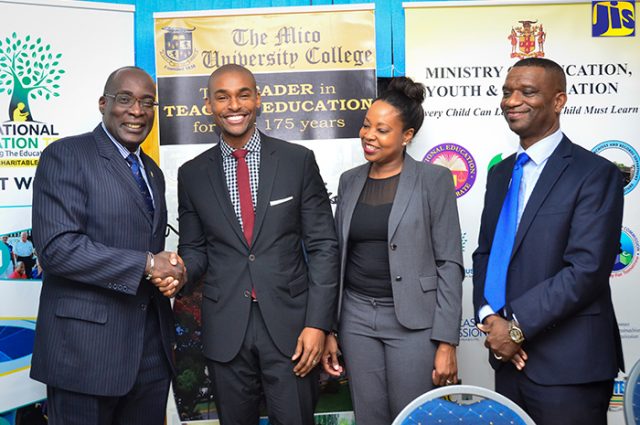 JIS: The BAU International University in Washington DC has established a scholarship in honour of Education, Youth and Information Minister, Senator the Hon. Ruel Reid.

The decision to set up the ‘Ruel Reid Transformational Leadership Scholarship’ was taken by the University to recognise Senator Reid’s lead role in arriving at a Memorandum of Understanding (MOU) between the Ministry and the University for the provision of 107 scholarships, over three years, worth $378.2 million (US$3 million).

These scholarships are available to student teachers to pursue undergraduate and graduate programmes at any of the tertiary institution’s campuses globally.

BAU University Board member, Paul Brunson, said the Ruel Reid Scholarship is to “pay homage and respect to Senator Reid for leading the process”.

The surprise announcement, which was made during the MOU’s recent signing at The Mico University College in Kingston, left Senator Reid at a loss for words and saw him welcoming the gesture with an elated “I’m speechless!”.

Mr. Brunson said the scholarship is open to any Jamaican student desirous of pursuing undergraduate and postgraduate studies, either in the United States or any of BAU Global Network’s campuses in Germany, Italy and Turkey, among other locations.

The MOU, resulting from the discussions between Senator Reid and Mr. Brunson, whose grandfather was Jamaican, between 2016 and earlier this year, will additionally see the University hiring 200 English language teachers for its global network of schools for the 2018/19 academic year.

Jamaica’s Ambassador to the United States, Her Excellency Audrey Marks, and the Ministry’s newly appointed International Donor Consultant for the Jamaican Diaspora in the US, Gail Dunwell, who works closely with the National Education Trust, were also instrumental in initiating the partnership.

Senator Reid, in welcoming the MOU, conveyed the Government’s gratitude to BAU University.

“I have had the opportunity of meeting different segments of the Jamaican diaspora (who) are always very interested in what is happening in Jamaica, and particularly how they can assist our education programme. We are very grateful for the strength of the Jamaican connection,” the Minister said.

“There are Jamaicans in very prestigious positions all over the world, and wherever they are able to influence certain decisions, we find that they always step up to the plate,” he added.

Mr. Brunson said the initiative’s genesis dates back 10 years when he first met his grandfather.

He said the knowledge of his heritage was the primary reason for seeking out how best he could make a tangible and meaningful contribution to Jamaica.

Against this background, Mr. Brunson said he made representation to the University’s administration and successfully lobbied their support in March 2016, which resulted in the MOU’s forging.

“So for all these reasons and more, I am excited and I am proud. This is only the beginning of this relationship,” he added.

President of The Mico, Dr. Asburn Pinnock, said the initiative is a “perfect fit” with the Government’s focus for education.

“I think this will go a far way in building our resources as we try to graduate more persons in Jamaica from tertiary education,” he argued.

The BAU Global Network, which spans three continents, has been providing higher education for over 15 years through its campuses, which are also located in Canada and Hong Kong.

Its flagship campus is Bahçeşehir University in Istanbul, Turkey, which has eight faculties, a school of languages, and two vocational schools.

CAPTION: Education, Youth and Information Minister, Senator the Hon. Ruel Reid (left), shakes the hand of BAU International University Board member, Paul Brunson, following the recent signing of a $378.2-million (US$3-million) three-year Memorandum of Understanding between the Ministry and the institution, for the provision of undergraduate and graduate scholarships for student teachers. The signing took place at The Mico University College in Kingston. The occasion was also used to announce the establishment of a scholarship in Senator Reid’s honour. Others (from third left) are the Ministry’s newly appointed International Donor Consultant for the Jamaican diaspora in the United States, Gail Dunwell, and Mico President, Dr. Asburn Pinnock.