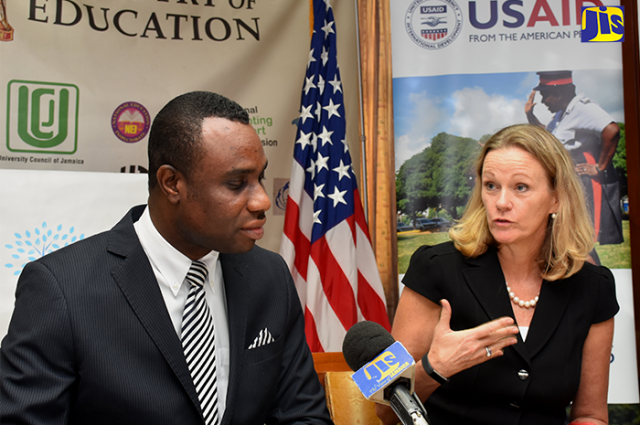 JIS: The United States Agency for International Development (USAID) has partnered with the Education, Youth and Information Ministry to provide grant funding in the sum of US$3 million for a Safety and Security in Schools Project.

Under the partnership, the USAID will provide the funds over two years. The National Education Trust (NET) will act as coordinator for the project.

The prime objective for the Ministry, through this initiative, is to implement the necessary measures to transform schools and their immediate surroundings into safe zones through a multilayered and multisectoral approach.

It will utilise schools, community, parents and public and private partnerships in an effort to ensure a safe environment that will facilitate a quality education system and raise the bar to benefit all learners, both male and female.

Specifically, the project will aid in controlling access to school compounds by installing or repairing perimeter fencing, and controlling the possession of weapons and other contraband in schools, through the use of security monitoring equipment and increasing the number of security personnel assigned to schools.

The project will also ensure the implementation of security and safety guidelines and continue the promotion of uniformed groups and clubs, which will promote positive values and attitudes at both school and community levels.

Addressing a ceremony to sign the letter of implementation for the project, at the Ministry’s Heroes Circle offices in Kingston, on July 3, Permanent Secretary, Dean-Roy Bernard, expressed gratitude to the USAID for the grant.

“We are extremely grateful for the partnership to assist our efforts. This is a moment to be celebrated and we look forward to the National Education Trust (NET) spearheading this project to lessen some of the challenges that we’re having in schools,” he said.

Citing the high level of violence in schools, Mr. Bernard stressed the immediate need to reduce conflicts and is hoping for “very good outcomes” with the implementation of the project.

Data received from the Safe Schools Programme (SSP) of the Ministry of National Security indicate that during the 2012/2013 academic year, 3,671 students were cited for antisocial behaviours of varying degrees.

Substance use and misuse among adolescents also continue to be a major concern.

For her part, USAID Mission Director, Maura Barry Boyle, said the project came to fruition based on discussions with the Ministry to improve security in schools.

The Mission Director thanked her team for mobilising and bringing the project together in record time. She said it will be implemented once the new school year begins in September.

The improved Safety and Security in Schools Project represents a much broader initiative than the SSP, which was instituted in 2004.

CAPTION: Permanent Secretary in the Ministry of Education, Youth and Information, Dean-Roy Bernard (left), listens to United States Agency for International Development (USAID) Mission Director, Maura Barry Boyle, at a grant agreement signing ceremony for a Safety and Security in Schools Project, at the Ministry in Kingston, on July 3.