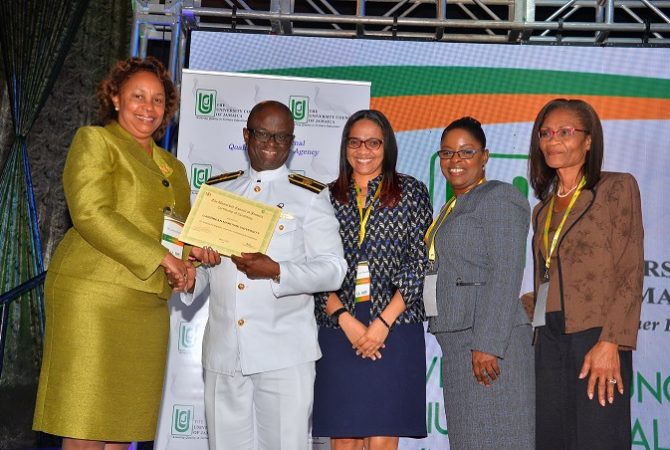 JIS: The University Council of Jamaica (UCJ) has officially presented formal certificates of Institutional Accreditation to the Northern Caribbean University (NCU) and the University of Technology Jamaica (UTech).

Both universities were presented with the certification at an awards ceremony held during the UCJ symposium on quality assurance in higher education on March 12 at the Iberostar Hotel in Montego Bay, St. James.

Institutional Accreditation is the status granted to an institution that has been found to meet or exceed established standards for educational quality.

Also, a number of other colleges received accreditation for several Bachelor’s and Associate Degree programmes.

Bethlehem Moravian College in St. Elizabeth received accreditation for its Associate of Science in Business Administration, and Hospitality and Tourism Management programmes; while the Edna Manley College of the Visual and Performing Arts in the Corporate Area received accreditation for five programmes, including its Bachelor of Arts in Education and Bachelor of Fine Arts in Visual Arts.

The UCJ has also given the stamp of approval to the Moneague College in St. Ann by awarding accreditation status to seven of its programmes, while the Montego Bay Community College received accreditation for eight programme offerings.

The Jamaica Stock Exchange, through its eCampus, received certificate of accreditation for its post-graduate Diploma in Financial Service Management; and the Jamaica Theology Seminary received accreditation for its Bachelor of Arts in Applied Behaviour Analysis and Bachelor of Arts in Applied Social and Professional Transformation.

Vector Technology Institute also received programme accreditation for three of its courses, including the Bachelor of Science in Technology Management.

CAPTION: Chairman of the University Council of Jamaica (UCJ), Dr. Carolyn Hayle (left), presents Deputy President of the Caribbean Maritime University (CMU), who is also Vice President of Academic and Student Affairs at the institution, Professor Ibrahim Ajagunna (second left), with a certificate of candidacy for institutional accreditation at an awards ceremony held during the UCJ’s Symposium on Quality Assurance in Higher Education on March 12, at the Iberostar Hotel in Montego Bay, St. James. Sharing in the moment (from third left) are Executive/Research Assistant to Professor Ibrahim Ajagunna, Lanna-Gaye Franklyn Green; Administrative Assistant to the Dean of General Studies at the CMU, Carlene McKinson; and CMU Consultant, Sonia Warmington.

The Human Resource Management and Administration Division has as its responsibility the systematic and coherent management and administration of the Ministry of Education’s personnel. This is necessary as a valuable asset in any organization is its employees. The Division helps...
read more