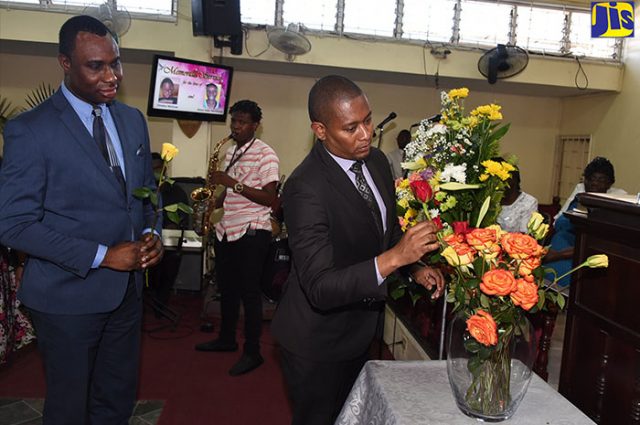 JIS: Three persons, including a ward of the State, are being considered for national honours for their acts of bravery during the fire at the Walker’s Place of Safety earlier this year that took the lives of two children and destroyed the Lyndhurst Crescent-based facility.

Minister of State in the Ministry of Education, Youth and Information, Hon. Floyd Green, made the disclosure at Monday’s (April 9) memorial service for Oneika McGrae and Anna Kaye Moreland, at the Faith Tabernacle Shiloh Apostolic Church on Lyndhurst Road.

He said that 18-year-old ward Selana Reid, along with a caregiver at the home, and a young man, who saw the fire and came to assist, have been recommended for the Award for Gallantry at this year’s National Honours and Awards Ceremony to be held at King’s House in October.

He noted that the three saved lives by waking up the children, who were asleep, and helping them to escape the blaze.

Scores of persons packed the church for the memorial service, including portfolio Minister, Senator the Hon. Ruel Reid, who read the first lesson, representatives of childcare agencies, family, friends and well-wishers.

The State Minister, in expressing sorrow at the loss of lives, said he is heartened at the outpouring of love and support from the public in the wake of the tragedy.

He noted that $9 million has already been donated for the rebuilding of the home in addition to other support for the children.

Mr. Green urged Jamaicans to honour the lives of those who perished by doing more for children who are in need of care and protection.

Leader of the Opposition, Dr. Peter Phillips, who is Member of Parliament for East Central St. Andrew where the home is located, said “there is much goodness around us”, and this was evident in how the community came together to assist on the night of the fire.

“The best of them came out, and they did what they could do for those children,” Dr. Phillips said, while calling for additional public support for the reconstruction of the home.

Several other agencies and community persons addressed the function, including Director of Children and Family Programmes at the Child Protection and Family Services Agency (CPFSA), Audrey Budhi.

Pastor at the Greater Grace Temple churches, Bishop Dr. C.A. Holdsworth, who contributed $10,000 towards the rebuilding of the facility, charged the congregation to “seize this opportunity to do something positive” for the nation’s children.

CAPTION: Minister of State in the Ministry of Education, Youth and Information, Hon. Floyd Green (right), places a flower in honour of two wards of the State who perished in a fire earlier this year at the Walker’s Place of Safety in Kingston. Waiting to make a floral tribute is Permanent Secretary in the Ministry, Dean-Roy Bernard. Occasion was a memorial service held in honour of the children on Monday (April 9) at the Faith Tabernacle Shiloh Apostolic Church on Lyndhurst Road.