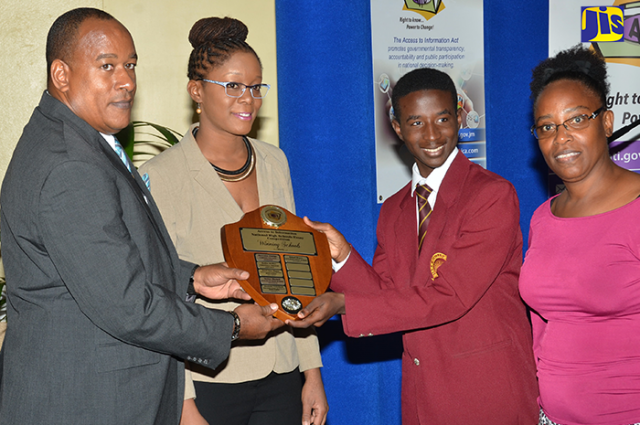 His took home the top cash prize of $50,000 at the awards ceremony held on April 3 at The Knutsford Court Hotel in New Kingston.

Entrants were asked to write on the topic ‘The Access to Information Act is Playing a Significant Role in Improving Accountability and Transparency in Jamaica’.

The students explored the impact of the ATI Act on tackling corruption as well as how it affects industrial relations; human rights; the economy; the environment; and social issues, such as health and education.

Senior Education Officer in the Ministry of Education Youth and Information, Paul-Davey Ashley, who delivered the main address at the awards ceremony, endorsed the theme, which, he said “provides a very good reference point for our students to research the Act and increase their awareness for how it can help them and others to become more informed citizens”.

“I am sure that as you gathered information on the provisions of the Act and the rights, you would have developed a greater understanding and appreciation for the efforts that have been made to provide greater transparency and accountability in public life,” he added.

Senior Legal Officer in the Office of the Prime Minister, Shereika Hemmings-Allison said she is heartened by the enthusiasm of the students, who, through their essays, demonstrated a sincere interest in national affairs.

“Through their work, the students continue to articulate their understanding of how Jamaica can progress as a country and give suggestions on strengthening our democracy while promoting a more prosperous nation founded on the principles of transparency and accountability,” she said.

She informed that for the next staging of the competition, efforts will be made to increase the prizes, through collaboration with other institutions.