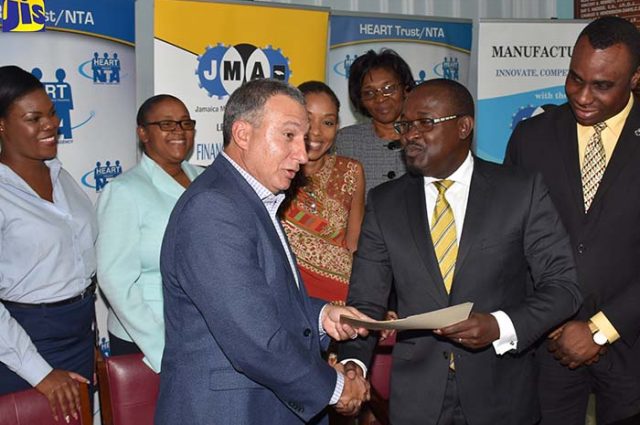 JIS: HEART Trust/NTA and the Jamaica Manufacturers’ Association (JMA), have signed a memorandum of understanding (MOU) geared towards providing on-the-job training for apprentices in the manufacturing and export sectors.

At the signing on Tuesday (January 23) at the JMA boardroom, downtown Kingston, Permanent Secretary in the Ministry of Education, Youth and Information, Dean-Roy Bernard, commended the entities for coming together to assist the nation’s youth who are in need of training and experience to secure employment.

“Today’s signing… represents a significant step forward in the efforts to address the shortfall of skilled, semi-skilled, technical and professional labour in the manufacturing sector. This will also allow for job creation and greater contribution to Jamaica’s economic output and increase in international competitiveness,” he noted.

JMA President, Metry Seaga, said he is elated about the MOU, for which discussions started in 2016.

He informed that several members of the JMA have already expressed an interest in the programme and have committed spaces for apprentices.

Mr. Seaga said the agreement seeks to address one of the persistent issues faced by manufacturers – that of finding skilled labour for production and other key areas of businesses.

He noted that the sector employs 77,000 persons.

Citing a recent study done by the University of the West Indies (UWI), he indicated that 78 per cent of manufacturers have difficulty hiring skilled staff, and up to 90 per cent of the micro and small firms experience problems hiring qualified staff.

“This is the case even when Jamaica’s youth unemployment persists over 20 per cent,” he pointed out.

Mr. Seaga noted that manufacturing contributes over eight per cent to Jamaica’s gross domestic product (GDP) and the sector will be better strengthened by having young people with the talents to sustain and grow businesses.

He gave the JMA’s commitment to doing its part to giving its members a competitive edge and providing Jamaica’s youth “the opportunity for employment and self-actualisation”.

HEART Trust/NTA Chairman, Edward Gabbidon, for his part, said the agreement will take the underserved youth from a situation of untrained to employment.

“Our greatest resource is our human capital. We have youngsters who are very good at doing things… (so) let’s capture that level of ingenuity and skill sets and turn (the youngsters) into being useful citizens of this country,” he said.

The partnership between the HEART Trust/NTA and the JMA is expected to lay the foundation for a sustainable manufacturing industry consisting of a highly skilled and qualified labour force.

Among other things, the agreement sees the reintroduction of the apprenticeship programme to the manufacturing and export sectors; the provision of jobs for apprentices who complete their programmes; business development support for improved productivity within firms; and greater opportunities for matriculation through a strengthened National Qualifications Framework.