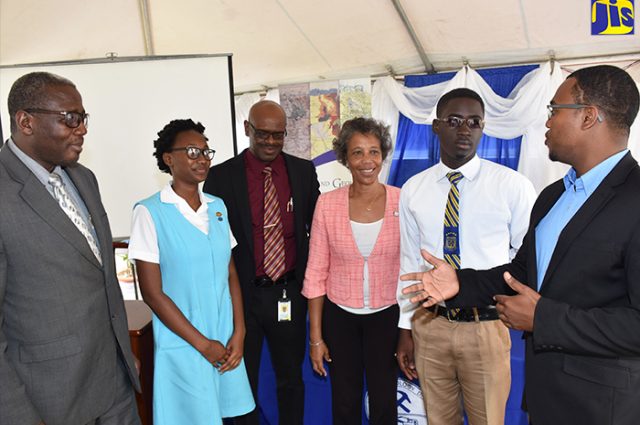 JIS: Young persons are being encouraged to pursue studies that will enable them to take advantage of the myriad career options in the geosciences.

Permanent Secretary in the Ministry of Transport and Mining, Dr. Alwin Hales, said career prospects are strong in this field, which has the potential for further growth and innovation.

“There are many careers involved in the mining industry, including scientists, engineers, geologists, surveyors, drillers, material specialists, information and communications technology professionals, power plant operators and management teams,” he said.

Dr. Hales was speaking at the launch of the Mines and Geology Division’s Geoscience School Tour, on Monday (April 30) at its Hope Gardens location in St. Andrew.

The Permanent Secretary noted that there is a great demand for geologists in particular, given the current shortage of such professionals in the exploration industry globally.

“A current demographic profile of senior geologists shows that there will be opportunities to attain senior positions for those entering the industry in the near future,” he said.

In the meantime, the Permanent Secretary said the school tour will encourage youth to “dig up” a career in the industry that researches, studies, extracts and transforms natural resources into energy sources and the materials needed for the manufacturing industries.

“The (Mining) Ministry, through the Mines and Geology Division, wants to bring to the forefront of young minds, the possibilities that exist in pursuing a career in the minerals industry,” he said.

He noted that the mining sector directly creates more than 2,000 jobs across the country in mineral extraction, production and manufacturing, and indirectly employs over 8,750 persons.

For her part, Country Coordinator for the United Nations Development Programme (UNDP), Ruth Clarke, also encouraged the pursuit of a career in the mining industry, pointing to areas of mineral management and mineral studies.

“Statistics show that in 50 years’ time, in 2068, we would’ve used five times more mineral resources than we would’ve used since 2000. People want resources and so you will need persons who are skilled and trained who can help you to manage the resources,” she said.

Ms. Clarke, who noted that she has been in the field for more than 30 years, called on girls in particular to get involved in the industry, lamenting that there is only 12 per cent of women in mining.

“Most people feel that it’s a profession for men…but we are seeing changes, and we have a number of geologists who are female,” she said.

The Geoscience School Tour, which is the second in the series, will get under way in Portland today (May 1).

Through the tour, the Mines and Geology Division provides information to schools on the island’s geology, and makes presentations on careers in the geosciences field.

The Division, which is part of the Ministry, has the statutory responsibility under the Mining Act and the Quarries Control Act to exercise general supervision over all prospecting, mining and quarrying operations throughout the island. It also manages the investigation, characterisation, documentation and release information on all aspects of the geology of Jamaica.

The Data Collection and Information Sharing (DCIS) Programme is an initiative of the Ministry of Education, Youth and Information and managed by the Information Division.  The Ministry recognises the importance of being able to access accurate and current data to...
read more