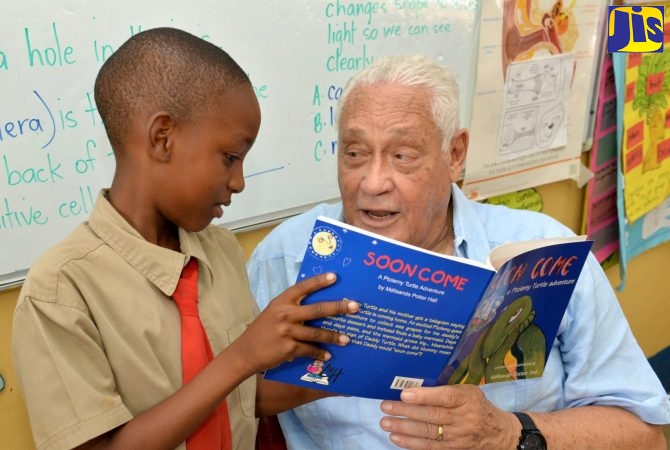 JIS: Minister without Portfolio in the Office of the Prime Minister, Hon. Mike Henry, says it is important to impart the nation’s history to the younger generation, so that they can learn valuable lessons from the ancestors.

Mr. Henry was visiting the Hazard Primary School in Clarendon on Friday (May 10), where he interacted with students of a Grade 4 class, sharing historical nuggets about the parish, including the origins of the school.

He lamented that students are often more knowledgeable about the history of other nations, noting, for instance that many young people only learn about the teachings of Jamaica’s first National Hero, Marcus Garvey after they have left school.

The others are: ‘Soon Come, a Ptolemy Turtle Adventure’; and ‘Tilly Bummie and other stories. Life in Jamaican Country and Town’.

After inviting students to read excerpts from the books, Mr. Henry, who is also Member of Parliament of Central Clarendon, formally handed them over to the class.

“I was very impressed with the attentiveness of the children…and by the reading ability that was demonstrated. I am leaving here enthused,” the Minister told JIS News following the session.

The Minister’s visit coincided with a literacy fair staged by the school, which was the brainchild of the institution’s Reading Teacher, Danielle Francis.

She told JIS News that she was inspired to host the event as part of the ongoing development of students, noting that it followed on a successful staging several years ago, which greatly benefitted the students.

“I like when children are well rounded…In terms of the developmental stages of children, reading is the most important foundation,” she said.

Ms. Francis thanked the Minister for reading to the students and sharing his knowledge, noting that the children were excited about his visit.

CAPTION: Minister without Portfolio in the Office of the Prime Minister, Hon. Mike Henry, guides Grade 4 student at the Hazard Primary School, Dwrayne Powell, during a reading session at the institution’s location in Clarendon on Friday (May 10).