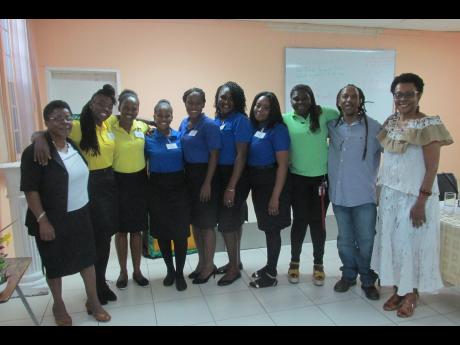 This division, which manages the project under the auspices of its parish office for Kingston and St Andrew, located at 124 East Street, Kingston, was formerly known as the Jamaican Foundation for Lifelong Learning (JFLL).

The workshop idea was conceived two years ago in a discussion about the “limited access of art to Jamaican children in socially depressed areas”. “The main concern expressed was the need to expose a wider cross-section of children and young persons … to various forms of art within the context of lifelong learning,” the organisers said.

Children were to be the target, but after much retrospection the initiators felt that “the project would have a greater impact in the long-term if parents were first engaged in these activities”. The overall aim of the project is to enable learners to plan, solve problems, and use and craft as a means of thinking and communication.

Classes are facilitated by a qualified artist and art instructor, who is also the coordinator of the workshop. The students who completed the recent workshop were trained by artist Mazola wa Mwashighadi.

Mwashighadi said there are many people who are making jewellery, therefore the approach to creativity must be different. Artisans, therefore, must thinking creatively to have an edge. The workshop he said suffered many “misfortune” including the drop in the number of trainees who had started.

On behalf of the trainees, Bowen-Black and McKay reflected on their experience. An emotional Bowen-Black graciously thanked the stakeholders, saying she did not know she had it “inside” of her to create the pieces on display. She was echoed by her colleague, who described their sojourn as an “exciting” and “grand” time.

The trainees were addressed by the guest speaker, retired conference interpreter, Annie Rose Kitchin, who was introduced by Althea Byll-Cataria, project initiator and sponsor.

Kitchin congratulated the trainees for the “courage shown” and the “vision demonstrated” in making sacrifices to undergo the training.  She said she was there to talk about their goals, and encouraged them to seize the many opportunities that might present themselves, while saying nothing is out of bounds in pursuit of their goals

After telling the story of a determined African woman who endured unspeakable abuse and hardship before obtaining a doctorate, she said, inter alia, “Whatever you dream, I encourage you to go for it. Let nothing hold you back. Don’t listen to people who discourage you, or tell you it can’t be done … Don’t listen to people who want you to be just like them, or to stay in your place.”

In moving the vote of thank Muffin Baily, who was participating in the project for the second time, profusely thanked everyone who was involved in the project. She also highlighted how she benefited from the programme.

Before her presentation Bailey and the other trainees modelled some of their own creations, which received positive feedback. Necklaces, wristlets, decorated bottles, metal and clay items, collages and paintings were all on display.