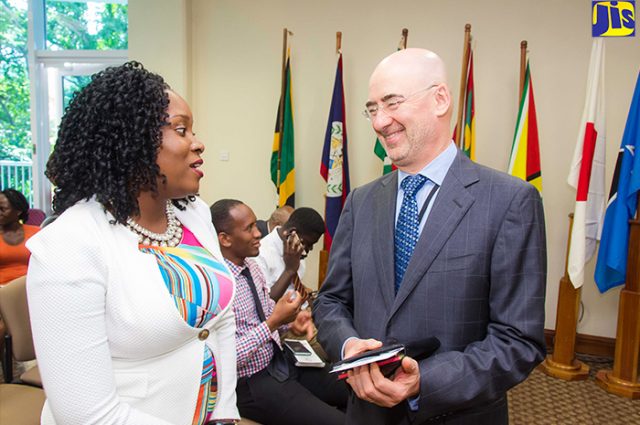 JIS: Six hundred delegates from nine countries are expected for the 2017 Youth Climate Change Conference, slated for October 10 and 11, at the Jamaica Conference Centre in downtown Kingston.

The event will bring together persons from Belize, Dominica, Grenada, Guyana, Jamaica, St. Lucia, St. Vincent and the Grenadines, Suriname, and Japan for two days of consultations and discussions aimed at heightening their awareness of climate change and identifying youth-led actions and solutions to the challenges associated with this phenomenon.

Participants will be engaged in a series of climate advocacy training workshops, presentations, exhibitions and competitions to increase their awareness of the various challenges and proposed solutions.

Cash prizes, vouchers, tablets, agricultural equipment and trophies will be awarded to the individual participants, educational/youth organisations and teachers scoring the most points in the competitions.

Additionally, three delegates from the participating Caribbean countries will get the opportunity to attend the 2017 United Nations (UN) Framework Convention on Climate Change, Conference of Parties (COP 23), which is slated for Germany in November.

The conference was launched at the University of the West Indies (UWI) Regional Headquarters, Mona, St. Andrew, on Tuesday, September 12.

“While there has been a growing awareness of how we are all being affected, recent events would have brought home the reality more forcefully, to our consciousness, of our growing vulnerability to climate change. The devastation of coastlines in northeastern Caribbean territories, Cuba and The Bahamas by Hurricane Irma is but the latest reminder of the danger we all face,” he said.

In this regard, Mr. Green stressed the importance of youth involvement in and understanding of global climate-change issues and their impact on the region, in tackling these challenges.

“Our young people will, more than ever, (need to) play a bigger role in how our world adapts to these challenges. Young people are quite adept at spreading new habits and technologies at their disposal (and) are well placed to contribute to the fight against climate change. For this, they must be fully aware of what global warming is and what needs to be done to prevent it,” he said.

In her remarks, Acting USAID Mission Director in Jamaica, Rebecca Robinson, said succession planning in dealing with extreme weather events, with an emphasis on youth involvement, is critical to spearheading future action against climate change.

“Jamaican youth are responding to the call. This is evidenced, not only in the high levels of participation in the previously held conferences in 2014 and 2015, but by a continued formation of youth interest groups focused on climate change and environment issues at the local, regional and international levels,” she said.

Ja REEACH II project is a four-year initiative implemented by ACDI/VOCA, which works with government, private sector, civil society and community-based organisations to increase awareness and application of practical actions to make Jamaicans more aware of and resilient to the impact of climate change.

The Finance Division provides financial and accounting services to support the Ministry. The Division provides guidance for all public educational institutions, MoE agencies and the Regional Offices, and manages the funds provided in the Estimates of Expenditure. The unit is...
read more