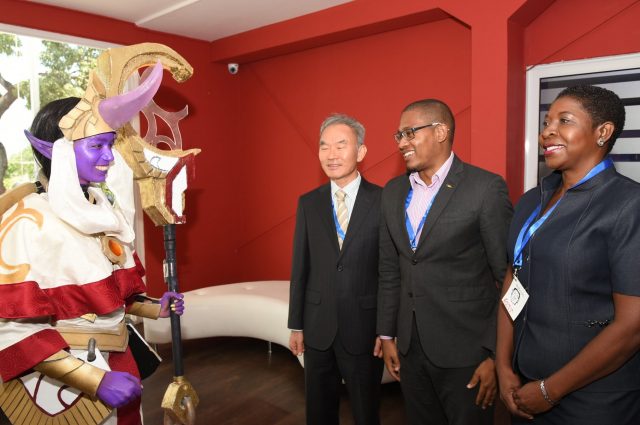 JIS: The Youth Employment in the Digital Animation Industry (YEDAI) Project has been relocated to the Office of the Prime Minister (OPM) as part of a strategic move aimed at accelerating the growth of the local animation industry.

Formerly housed in the Ministry of Science, Energy and Technology, the project seeks to foster innovation and support youth employment in animation.

State Minister for Education, Youth and Information, Hon. Floyd Green, said the decision was made to transfer the project “because we believe that under the OPM, which is focused on economic growth and job creation, we need to bring in all our strategic resources”.

“We have also put the HEART Trust/NTA under OPM; we have aligned that with our HOPE programme, which is focused on youth unemployment,” he noted.

“Now that we have all of these resources housed under the OPM with the attention and direction at the highest level of Government, we expect that the bureaucratic issues will be moved out as we see how we can get our animation industry right across the length and breadth of Jamaica,” he added.

Mr. Green was addressing stakeholders on the opening of the two-day Jamaica Digital Screen Business Conference at the Spanish Court Hotel in New Kingston on May 24.

Organised by the World Bank/Korean Trust Fund in collaboration with Youth Employment, the conference created an interface for industry-focused dialogue among business owners, policymakers, industry experts, academics and other animation stakeholders.

Discussion focused on matters relating to intellectual property rights, creating a regulatory framework for the local animation industry, certification and standards for training programmes, and incentive schemes for investors and animation studios/businesses.

The event was in keeping with the Government’s focus on supporting youth employment, innovation and entrepreneurship in the digital and animation industries in Jamaica.

State Minister Green noted that the 11 youth information centres (YIC) across the island will be transformed into innovation centres, which, he said, “will focus a lot more on the digital economy.” The first Youth Innovation Centre is slated to open on May 31 in Westmoreland.

“We have already received support from the United States Agency for International Development (USAID) (to ensure) that we have the necessary technology, equipment and software installed into our centres,” he said.

He noted that more rural youth will benefit from training in animation as part of the Government’s thrust to equip over 6,000 persons with such skills.

Meanwhile, Mr. Green said he wants to see more animation used in the communication of Government programmes and policies similar to the iCat character used by the Broadcasting Commission of Jamaica in its public education initiatives.

He said his Ministry has begun exploring ways to make this possible.

In his remarks, Chargé d’Affaires of the Embassy of the Republic of Korea in Jamaica, Ambassador Young Gyu Lee, said his country has been supporting Jamaica’s animation sector through the Korea Trust Fund (KTF)/World Bank partnership.

“A Jamaican delegation, including animators, visited Korea for idea sharing and consultation and participation in internship programmes. Korean animation specialists also came to Jamaica to assist in training programmes for some Jamaicans,” he noted.

The Korean Ambassador indicated that his country “thinks of Jamaica as a valuable cooperative partner and will continue to pay attention to its development in animation”.

He expressed the hope that the conference will enable the sharing of insights “so that Jamaica gets more ideas for animation development”.

World Bank Co-Task Team Leader for the YEDAI Project, Karlene Francis, in her remarks noted that her agency has been partnering with Jamaica on initiatives to grow animation, including the annual KingstOOn Animation Conference and Film Festival.

For her part, YEDAI Project Manager, Margery Newsome, urged participants to take full advantage of the conference, as it will enhance “collective knowledge and understanding of  global animation and take us closer to achieving our goal of building the local industry”.

CAPTION: State Minister for Education, Youth and Information, Hon. Floyd Green (second right), observes as cosplayer, Rhea Rampair, demontrates her portrayal of Soraka, the Starchild from the videogame League of Legends. Occasion was the opening day of the two-day Jamaica Digital Screen Business Conference, at the Spanish Court Hotel in New Kingston, on May 24. Others from (second left) are Chargé d’Affaires of the Embassy of the Republic of Korea in Jamaica, Ambassador Young Gyu Lee and World Bank’s Co-Task Team Leader for the Youth Employment in the Digital Animation Industry (YEDAI) Project, Karlene Francis.