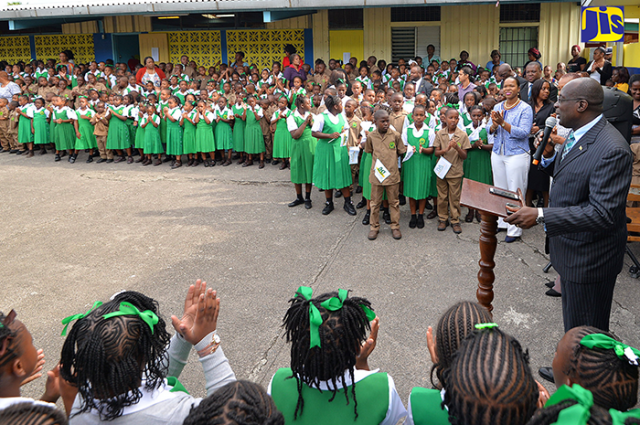 JIS: Two days into his tour of schools for the new school year, Minister of Education, Youth and Information, Senator the Hon. Ruel Reid, visited the Mona Heights Primary School and officially opened a new 24-unit sanitation facility at the institution on Tuesday, September 5.

The units were recently constructed at a cost of approximately $5 million, with the Ministry of Education committing $4 million to the project. The remainder was provided by the parents.

In his address to the students, the Minister said he was pleased to have been invited by the institution to open the new facility.

He congratulated Principal, Fabian Mahabeer, and the staff for overseeing the construction of the new facility and ensuring that it was completed for the start of the new academic year.

“We’re very excited about what is happening at Mona Heights Primary. This is a clear example of leadership. This is preparedness… that you can plan ahead for the beginning of the school year,” the Minister said.

The Minister said the Ministry would continue to provide more resources for the school.

“We will continue to invest in this institution to make it into a First-World institution. We are looking forward to improving the infrastructure and bringing information and communications technology, making sure you’re properly wired and that you have the latest technologies in your classrooms,” he added.

In response, Mr. Mahabeer thanked Senator Reid for visiting the institution and opening the facility.

“We feel privileged. The Minister has always had an interest in our school. He sees where we are trying to make a difference in all spheres of the education sector, so his association with us continues to grow,” Mr. Mahabeer said.

He said the new sanitation facility is needed as in the past there was only one bathroom at the back of the building to serve the children.