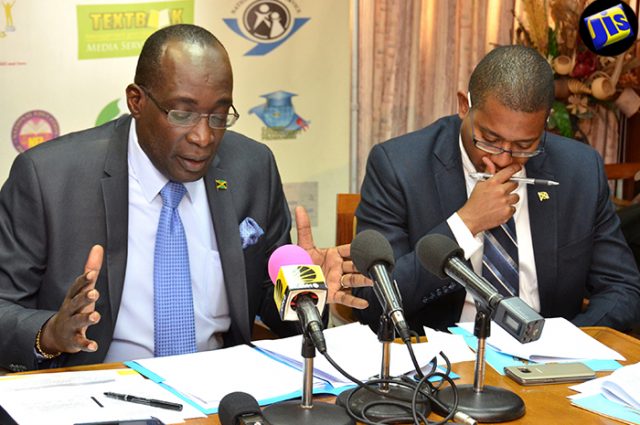 JIS: The Ministry of Education, Youth and Information will be implementing a number of initiatives to address the decline in mathematics passes in this year’s Caribbean Secondary Education Certificate (CSEC) Examination.

The pass rate for mathematics was 47.7 per cent, which is a 14.3 percentage point decrease compared to 2015.

Speaking at a press conference at the Ministry’s Heroes Circle offices in Kingston on August 18, Portfolio Minister, Senator the Hon. Ruel Reid, informed that an additional 50 mathematics coaches have been identified to provide support to schools.

“In particular, the mathematics coaches will be providing support to 100 underperforming secondary schools,” he said.

In addition, close to 230 student-teachers have been awarded scholarships to pursue courses in mathematics, science and technical vocational education, with 138 to pursue programmes in secondary-mathematics education.

The Education Minister further informed that an audit is being undertaken to identify heads of departments (HODs) in the secondary system, who have not yet been trained in the Leadership of Mathematics Programme, which is a joint venture with the National College for Educational Leadership.

“New and untrained HODs will be engaged in three days of training from October 12-14, 2016,” Senator Reid said.

These measures, coupled with improved monitoring of schools, more capacity-building initiatives for teachers and a renewed focus on improving school leadership, should go a far way in effecting improvements in mathematics and other subject areas that recorded declines.

The fall-off in mathematics comes after three consecutive years of improvement in the performance of students in the subject area. Passes moved from 37.2 per cent in 2012 to 62 per cent in 2015.

Senator Reid blamed the decline on an inadequate number of appropriately trained teachers in the system.

“Based on our  2013/2014 Census,  only 207  of the 1,784 mathematics teachers deployed in the secondary-education system are fully qualified to teach mathematics to grade 11. This means only 207 have at least a bachelor’s degree in mathematics teaching,” Senator Reid said.

He said it is estimated that 111 fully qualified teachers left the system in 2015.

Senator Reid said this would have affected the preparation of a significant number of students, and the ability of schools to maintain the standards of teaching and learning.