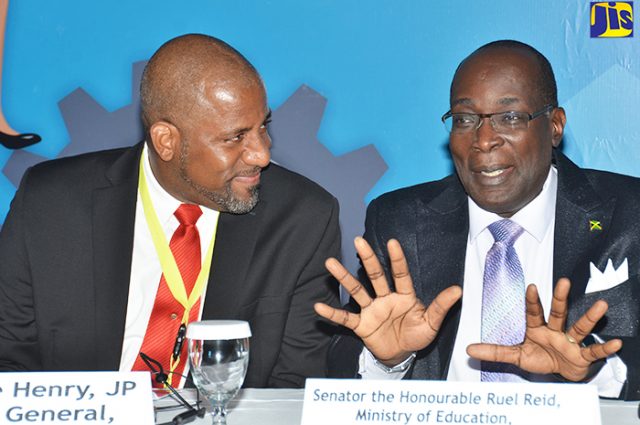 JIS: The Ministry of Education, Youth and Information is working with stakeholders to ensure the delivery of a first-rate national apprenticeship system for Jamaica.

Portfolio Minister, Senator the Hon. Ruel Reid, said the system will be crafted from established models in countries such as Australia and Singapore.

He informed that under the proposed programme, grade 11 students can enter into an apprenticeship system or complete their formal schooling, after which it becomes mandatory.

He said the programme will “cut off the flow of unattached youth” as it provides for a “seamless education system.”

“In the Australian model, it is mandatory that every youth who wants to transition into the formal economy to go through an apprenticeship programme as supported by the private sector. That is the model I want to have. It therefore solves your social problem and mismatch in terms of your need for the kind of skills for the different job opportunities,” he pointed out.

Senator Reid was addressing Tuesday’s (Feb.14) opening of a Labour Market Forum under the theme: ‘Apprenticeship for the XX1 Century: A Model for Latin America and the Caribbean’ at the Spanish Court Hotel in New Kingston.

He noted that the apprenticeship system will provide employers with a reservoir of certified and trained skills.

He informed that the pay for the apprentices will start at about minimum wage and once they transition into employment, the full-time compensation package will flow.

For her part, General Manager of the IDB Country Department Caribbean Group, Therese Turner-Jones, noted that an effective apprenticeship system can contribute to the transformation of the workforce and promote economic development.

She said it has the potential to address youth unemployment, increase productivity, and ultimately make the country more competitive.

She cited the United Kingdom, where 70 per cent of employers have reported increases in their productivity and the quality of their products and services as a result of an apprenticeship programme.

She said there is evidence in Brazil, which shows that trainees, having completed an apprenticeship programme, have a greater chance of finding a formal job and earn higher wages in the short and medium-term.

“Apprenticeships can provide young people with real jobs plus more practical accessible training than formal education. It can equip them with the ability to move forward in their careers and also develop their life skills,” she pointed out.

The two-day Labour Market Forum is being hosted by the Planning Institute of Jamaica in collaboration with the Inter-American Development Bank (IDB) and the HEART Trust/NTA.

The main objective is to disseminate labour market information to a select group of participants to facilitate informed career choices, while at the same time influencing policy and programme development.

Participants will engage in discussion on transforming the labour market to promote social and economic development through apprenticeships. Previous fora have looked at various topics such as unemployment, insurance and labour market reform.

CAPTION: Minister of Education, Youth and Information, Senator the Hon. Ruel Reid (right), makes a point to Director General, Planning Institute of Jamaica (PIOJ), Dr. Wayne Henry, at the opening of a Labour Market Forum at the Spanish Court Hotel in St. Andrew today (February 14). The two-day event is being hosted by the PIOJ in collaboration with the Inter-American Development Bank (IDB) and the HEART Trust/NTA.

How to avoid conflicts at school

Conflicting situations may arise in your classrooms. Many times there are reports of students fighting or verbally abusing others. Unfortunately, some of these situations have led to the death of some of your fellow school mates. It is always best...
read more