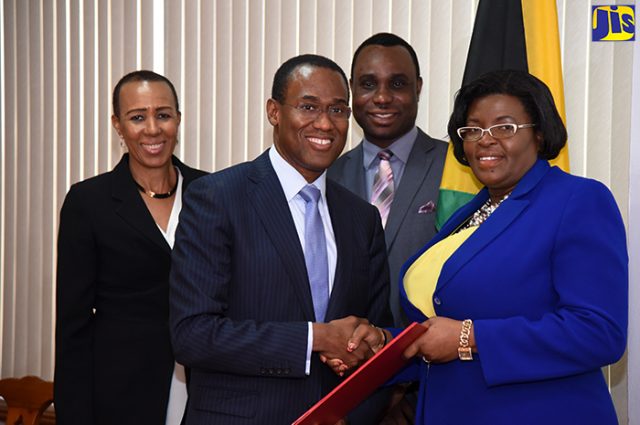 The new Heads of Agreement for the 2017 to 2021 contract period was signed between the Jamaica Teachers’ Association (JTA) and the Government during a ceremony at the National Heroe Circle offices of the Ministry of Finance and the Public Service, on Wednesday (May 16).

Portfolio Minister, Dr. the Hon. Nigel Clarke, said the Government values the nation’s teachers and the role they play in the society.

“The teachers of Jamaica represent a foundation in our society. We have all been influenced by teachers who have played crucial roles in our own individual lives, and we wouldn’t be where we are without our teachers,” he said.

Dr. Clarke said he is pleased that an agreement was reached that all involved were comfortable with.

President of the JTA, Georgia Waugh Richards, said she is pleased that all parties have come to an agreement after a tough negotiating process.

“We had brought the offer to the teachers of Jamaica, and we all agreed that the four-year contract period would hold, but there are other items of fringe benefits that had seen improvements, and based on that, the teachers decided that it was now time to accept,” she said.

She noted however, that she could not disclose the new package until the nation’s teachers were first briefed on the final agreement.

In the meantime, Permanent Secretary in the Ministry of Education, Youth and Information, Dean-Roy Bernard, said he is pleased with the outcome of the negotiations.

“We have done very well in negotiating on behalf of the welfare of our beloved almost 25,000 teachers, and this is a signal moment and we are happy to be part of it,” he said.

CAPTION: Minister of Finance and the Public Service, Dr. the Hon. Nigel Clarke (second left), shakes the hand of President of the Jamaica Teachers’ Association (JTA), Georgia Waugh Richards, after they signed a new Heads of Agreement for the nation’s teachers for the 2017 to 2021 contract period. The agreement was signed during a ceremony at the National Heroes Circle offices of the Finance Ministry on Wednesday (May 16). Also pictured (from left) are Minister without Portfolio in the Finance Ministry, Hon. Fayval Williams; and Permanent Secretary in the Ministry of Education, Youth and Information, Dean-Roy Bernard. 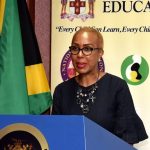 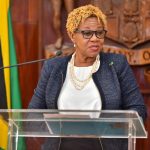 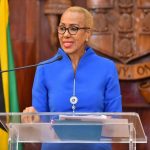