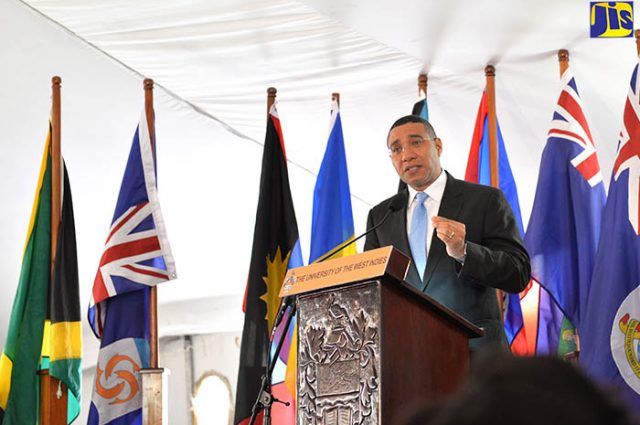 JIS: The Government plans to restructure the funding arrangements for tertiary-level education to make it more accessible.

Prime Minister, the Most Hon. Andrew Holness, says he is looking at instituting a new model for financing tertiary education, which will entail a subsidy on loans.

Mr. Holness was speaking at a ceremony to induct him into the Park of Honour located at the University of the West Indies (UWI), Mona, on May 3.

“If we are going to expand tertiary education, then the subsidy may have to shift from the fees to a subsidy for the financing, meaning you have to make it easier and more accessible for students to finance their education, rather than to give a subsidy for fees,” he explained.

Mr. Holness argued that “it might not be the best model, but it is the model that I believe could see an expansion in the number of students entering tertiary education”.

“It is the ability to access the financing of tertiary education, making it affordable over the lifetime of the student, treating it more like a mortgage on a house, because, effectively, your tertiary education is your greatest capital acquisition. It probably would mean an increase in the total cost borne by each person wanting to access (funding),” he noted.

Mr. Holness said the Government will be looking at expanding the resources available to fund tertiary education, with the assistance of financial institutions.

“In this context of a very fixed education budget, the solution has to be how do we engage (and) encourage financial institutions plus the government to increase the pool of the student loan (and to ensure that) the interest rates are affordable,” he argued.

The Prime Minister further suggested that under this funding proposal, preferential treatment would be given to programmes that support skills the country needs. In addition, he said greater programmes of bonding, and expanding the offerings of universities would also be considered.

“We cannot implement such a measure right away, but we must at least start the discussion, otherwise we will continue, every year, to have students who start their courses and can’t pay for it,” he said.

The Prime Minister said he will be engaging various stakeholders in discussions about the proposed new funding arrangements, including Leader of the Opposition, Dr. Peter Phillips.

In the meantime, Mr. Holness is imploring students who are to benefit from the Government’s recent financial support of $300 million to “pay back and pay forward”.

The money, which will come from the Education Ministry’s budget, will help financially challenged Jamaican students at UWI, University of Technology (UTech) and the Caribbean Maritime Institute (CMI). The funds will be available as at September this year.

“We have assisted, but you must pay back (the money) so that others can benefit, and you must pay forward – help others who are coming (and) give back to society,” he said.

Mr. Holness is the 18th Head of Government to be inducted into the park, which was established in 2005 to honour UWI graduates who have been or are serving as CARICOM Heads of Government.

CAPTION: Prime Minister, the Most Hon. Andrew Holness makes a point while addressing attendees at a ceremony to induct him into the Park of Honour at the University of the West Indies, Mona, on May 3. Mr. Holness is the 18th Head of Government to be inducted into the park, which was established in 2005 to honour UWI graduates who have been or are serving as CARICOM Heads of Government.