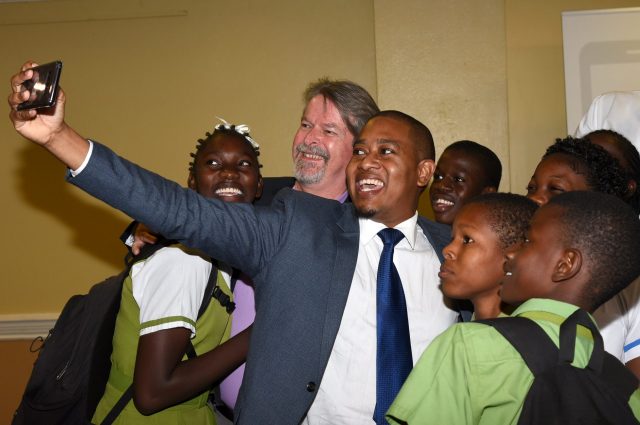 JIS: State Minister for Education, Youth and Information, Hon. Floyd Green, says that the Government continues to explore ways to enable greater youth participation in decision-making at the national level.

He said that in addition to reinstating the National Youth Parliament two years ago, 16 youth advisors have been appointed, who have sat on the policy decision-making  boards for the National Identification System (NIDS), reform of the Sexual Offences Act, and the Road Traffic Act, among others.

He noted that the National Youth Policy, which was revised last year, has among its objectives “that we must maximise youth participation in the decision-making process”.

The Education State Minister, who has responsibility for youth, was speaking at the launch of the United Nations Children’s Fund (UNICEF) U-Report at The Knutsford Court Hotel in New Kingston on May 22.

The free social-messaging tool provides a platform for young people to add their voices to matters of national importance.

Used globally by over five million people in more than 40 countries, U-Report is youth-led and fosters genuine youth participation, allowing them to speak out on issues affecting them.

The initiative is the first of its kind in the English-speaking Caribbean and targets young people between the ages of 13 and 29, who can sign up to be U-Reporters via social media platforms Facebook and Twitter.

Telecommunications giant Flow has partnered with UNICEF to allow young people to sign up via SMS text messaging at no cost to Flow users.

Once registered, U-Reporters are sent polls regularly on a wide range of issues, including crime and violence, health and education.

Mr. Green welcomed the launch, noting that it aligns with the Government’s plans for youth involvement.

He said that U-Report will serve as a tool for guiding decision-makers as well as justify implementation of policies for the benefit of young people.

Meanwhile, National U-Report Coordinator, Christopher Harper, informed that the platform’s accompanying website will allow the public to view the data collected from what young people are saying.

He noted that U-Report will provide an opportunity to hold the authorities accountable.

“If we’re getting the responses in high numbers… we now have an avenue to say ‘how are you responding to the findings’?” he pointed out.

UNICEF Jamaica Representative, Mark Connolly, for his part, said the tool will keep discussions ongoing among youth and enable the sharing of solutions to problems affecting them.

In a case study provided by UNICEF, over 3,000 U-Reporters in Chile in 2015 were asked what they thought the top priority for teens should be, and sex education emerged as important.  As a result, focus was shifted to give sex education precedence.

Executive Chairman of the Flow Foundation, Errol Miller, expressed support for the platform and noted that “by giving young people a voice they can take their rightful place in society as agents of change”.