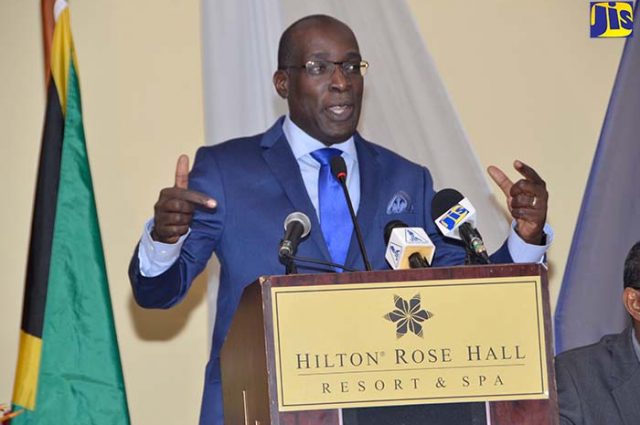 JIS: Minister of Education, Youth and Information, Senator, the Hon. Ruel Reid, says the Government has a responsibility to ensure that all students have access to quality education, regardless of their socio-economic situation.

He noted that the elimination of school fees at the secondary level aims to ensure that “no child is left behind and everyone will have a chance of pursuing a tertiary education, and higher, regardless of status”.

“The Government that I am a part of is committed to giving schools as much resources as is possible. We are saying that those who can make a contribution… there is nothing wrong with that. What I am saying, however, is that it makes no sense that there are (people)… who cannot pay the mandatory fees, and then we are going to say ‘you cannot come to school unless you can pay the fees’,” he argued.

Senator Reid was addressing a service to commemorate the 240th anniversary of Ruseas High School held on March 26 in Lucea, Hanover.

The Education Minster noted that when he sat the Common Entrance Examinations many years ago, there were approximately 55,000 students competing for only11,000 traditional high-school places.

Of that 11,000, only 10 per cent would find themselves in a sixth form and 10 per cent of that number would go on to university.

He indicated that between 1948 and 2000, only 50,000 Caribbean people graduated from all the campuses of the University of the West Indies (UWI).

He said that having that knowledge, he had no choice but to “go back to basics, giving schools all the necessary tools to succeed”.

He added that while a lot of progress has been made since then, there are still parents who fall below the poverty line, and the Government has to ensure that their children have an equal chance at a quality education.