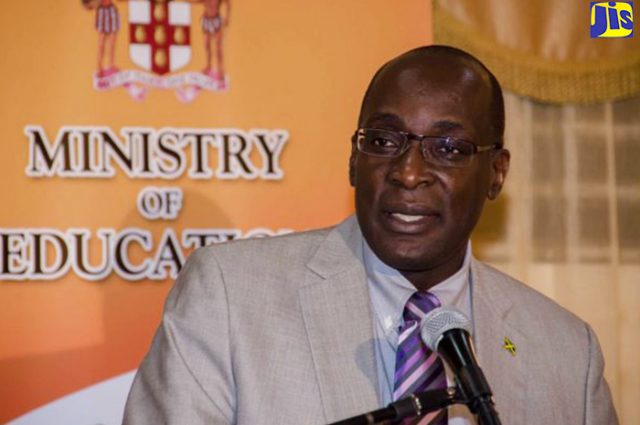 OBSERVER: IN an effort to bolster educational outcomes across the island, the Ministry of Education has earmarked $34 billion that will go directly into the coffers of secondary level institutions over the just-begun academic year.

Speaking with the Jamaica Observer in a one-on-one on Tuesday, Minister of Education Senator Ruel Reid advised that the Government is committed to fuelling and funding the sector with the resources needed to secure a Jamaican workforce ready to take on the opportunities that will become available.

In an unprecedented move, the minister released a report of the allocation to high schools across the six regions of the ministry. The report indicates that the majority of institutions are being allocated more than $220 million each for the academic year 2017/18, with a few institutions in regions one, five and six identified to receive in excess of $300 million each.

The allotments include operational grants, regular subvention, as well as support for infrastructure, maintenance, safety, ICT, staffing, among other things.

Notably, approximately $2 billion has been included across all regions for the feeding programme under the auspices of the Programme for Advancement Through Health and Education.

The minister spoke to the belief that there exists a budgetary fallout after the ministry’s insistence on a cap on parents’ contribution and the elimination of mandatory fees to institutions.

He continued that schools will acknowledge, and the data will support it, that “half of the total parent contribution collected came only from Region One; it’s only there in that area that there was any real compliance”.

He stressed, therefore, that the other five regions would now be “benefiting tremendously from the policy”.

“I know schools want more and more, and they have some needs, but as a ministry we still have to have a policy; we can’t have a free-for-all and no control. The sector must have order,” he said.

Senator Reid indicated that, “There is no such realisation that an income stream had been closed for schools. This is [the] second year, and that has not happened.”

He indicated that schools are encouraged to prepare and present budgets that reflect the support need for their programmes and they will see the funding is in place and the programmes are run by “labour support”.

“Overall, I think it is a great win-win, as schools now have a set of funding that insulates them,” Reid explained.

“We have given them funds to run the core programme, and they have substantially more resources to cover this.”

In reference to the allocation per student, Minister Reid said: “The $19,000 was a reference point, but we have had to give support to TVET (Technical And Vocational Education and Training), science, and other programmes; staffing included.

“All this has been done within the budget that we were given. It all has to do with how creative Dr McLean [chief education officer] and the team have been to deliver what we considered to be the responsibility for the Government.”

Minister Reid made sure to add that the primary schools had not been left out.

“We have increased grants to primary schools by some 169 per cent. We have been fixing up their canteens. They have already got increases for their janitorial services and maintenance. We’ve spent over $554 million in the improvement of the physical space for primary schools.

“We [are] working on more resources for safety and security in those schools. We can’t do everything overnight, but we working on it,” he said.

Reid reinforced that it was a promise of his Government to support education across the island and to raise the educational outcomes and available opportunities for access to especially at-risk youth.

“What we don’t want is for finances to be any sort of barrier to student access to programmes. We are committed to this, we have allocated the funding, and see that the institutions receive it in a timely manner,” he said.

CAPTION: Minister of Education Senator Ruel Reid speaking with the Jamaica Observer at his Heroes’ Circle offices in Kingston.