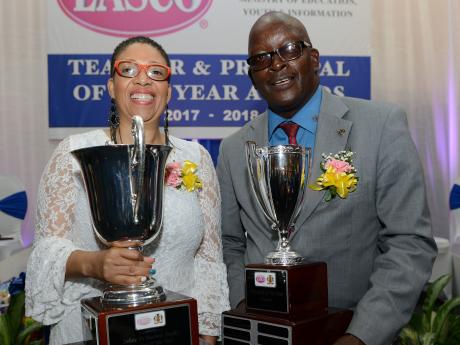 GLEANER: The coveted trophies for 2017 ‘teacher of the year’ and ‘principal of the year’ have been won by two Manchester educators.

Head of the Business Education Department at the Bishop Gibson High School Ingrid Antoinette Peart-Wilmot was named LASCO/Ministry of Education, Youth and Information Teacher of the Year, while Mandeville Primary and Junior High School’s Howard Salmon was declared principal of the year.

Peart-Wilmot boasts over two decades in the classroom at the secondary and adult levels.

“It could have easily been anybody so, I was just relieved when my name was called,” said Peart-Wilmot.

She established the school’s cosmetology programme in 2015 and is the founder and coordinator of the annual ‘Miss Bishop Gibson Talent and Awareness Pageant’ which amassed a net profit of $700,000 in the previous showing.

Salmon has over 30 years in developing productive  students and administrators.

“This award is for my students, my teachers, the parents of the school community and most of all, my parents,” Salmon told The Gleaner.

In his tenure as principal of the Mandeville Primary and Junior High, he has increased student attendance by 20 per cent through the restoration of student faculty relationship.‎

CAPTION: Teacher of the year Ingrid Antoinette Peart-Wilmot and principal of the year Howard Salmon with their trophies after being named today – Ricardo Makyn/Photographer

The Tertiary Unit has as its responsibility the supervision of the tertiary educational institutions. These institutions provide higher level technical, professional and managerial skills that the country needs for national development The unit ensures that it is offered in an...
read more