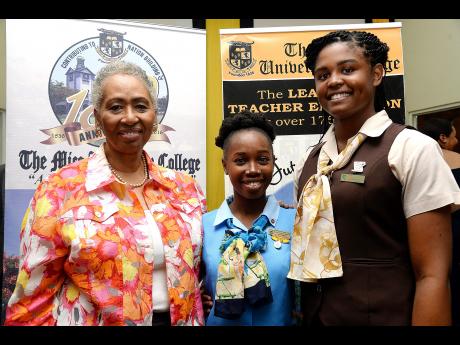 GLEANER: Of the countless lessons The Mico University College has taught 22-year-old teaching aspirant Denielle Morrison, critical thinking is the most deep-rooted.

A third-year student reading for a bachelor’s degree in primary education, Morrison is the 2017-18 recipient of the prestigious Arthur Grant Scholarship.

But while her merits now afford her such academic honours, the youngster from Wild Cane, St Ann, recounts a time before she had been ingrained with critical-thinking skills, a time when the intricacies of mathematics, her current area of specialisation, threatened to derail her studies.

“Like many, I dreaded math. There was a mental block, but at the same time, I knew it was essential. The breakthrough I needed after struggling with it for so many years came during my first year when a particular teacher taught me that it’s all about thinking critically and approaching problems in a systematic way. They instil critical thinking in you at Mico, and because of that, I’m an A-plus student in math,” Morrison told The Gleaner moments after receiving her scholarship during an awards ceremony on the school grounds on Tuesday.

Set to graduate in 2019, the Edwin Allen past student already has plans to complete her master’s at Mico.

Thereafter, Morrison is keen to impart her critical thinking qualities to primary students in a remote area, similar to the one she’s from.

“I want to bring real-life experiences. I want them to understand that through critical thinking, math, in particular, is just another subject. It’s something we apply in our everyday lives,” she explained.

In the same breath, the scholar voiced her support for the partially implemented national standards curriculum aimed at shifting focus away from rote learning and towards critical thinking.

To this end, Morrison singled out the Primary Exit Profile (PEP), which is to replace the Grade Six Achievement Test in 2019, as a strategic move on the part of the education ministry.

“I’ve been in situations where the day of an exam, or the day before, something happened and I was so out of it mentally that what I produced on the exam wasn’t close to my best effort. With PEP, you’ll be able to utilise your cognitive skills while demonstrating your development over a period of time,” Morrison reasoned.

She continued: “So, having grades being accumulated over the years in different areas will be a better representation of the student rather than them just studying or swatting for a few weeks and writing an exam that will determine which high school they transition to.”

‘I’m Determined To Break The Stigma’

For twenty-two-year-old Denielle Morrison, a tertiary education isn’t just a catalyst for personal development, but an avenue to uplift her family and the small community of Wild Cane in St Ann, where she is from.

“I’m the first of three children to be at the university level, and it’s safe to say

that just about seven of us from my community and the neighbouring community actually went to sixth form. Unfortunately, from that bunch, only two of us matriculated to [the] tertiary [level] ,” Morrison explained.

“It’s the norm to see a girl fresh out of school and pregnant, and I’m determined to break the stigma attached to my community,” she said.

A long-time lover of the teaching field, Morrison initially had no access to funds to further her studies after completing sixth form at the Edwin Allen High School.

“My parents, especially my mother, were always supportive despite the challenges. But my father made it clear that I would have to join the police force because he didn’t have the means to fund my schooling,” Morrison noted.

The Miconian, who describes herself as a ‘go-getter’, explained how she laboured at her past school, Mount Mariah Primary, immediately after sixth form to accumulate funds to kick-start her teaching pursuit.

Now well into her studies at the Mico University College, Morrison was awarded the 2017-18 Arthur Grant Scholarship valued at $200,000.

The scholarship, which is named after a former lecturer and vice-principal at Mico, was awarded to Morrison on Tuesday, after which she declared:

“Sir Arthur Grant has given so much to education in its entirety. I’ll do my best to honour the name of the great man through contributing positively to the sector when my day comes.”

Through more than 25 donors from the alumni and corporate companies, Mico awarded 23 students scholarships worth a combined $4 million.