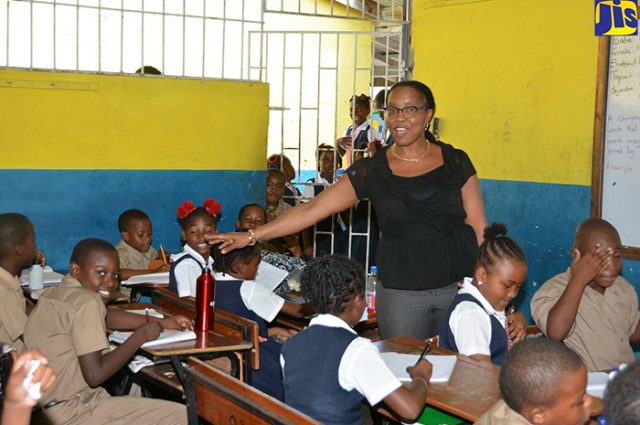 During an interview with JIS News, Mrs. Rattray Hammond said that in an effort to get students excited about mathematics, the school has implemented several activities based on the subject.

“We have a maths pageant, and we have an event called Maths Explosion, which is held annually in November,” the Principal informed.

Maths Explosion consists of each grade at the school setting up displays that highlight various strands and techniques of mathematics, after which teachers and students make the rounds to the classes to view the displays.

The day is topped off with a maths pageant in which children from both lower and upper school participate, culminating with a Maths King and Queen being chosen.

For her part, Mathematics Coordinator at the school, Toni Simpson Reid, said the added attention to the subject has, so far, been rewarding, and has inspired even more maths-centred activities.

“We also have a daily maths quiz, which sees questions being posed daily to lower and upper school… . The students go to work them out, and the first to get the correct answer gets a free lunch that day, so it helps to boost (their excitement),” Mrs. Simpson Reid noted.

She argued that Literacy had been topping Numeracy over the years and it is time to put both on the same level.

The Coordinator said that not only was the school focused on improving performance in maths, but it also wanted to make the subject appealing and fun. One way of ensuring this is the school’s monthly newsletter, which is not only purchased by students but given to parents and other stakeholders.

“Pictures from maths and other school-related events, general knowledge, and maths quizzes are put in there. We sell it to the students and teachers, and it sells quickly, especially in November.

We also give copies to stakeholders in the community, and also leave copies at the post office, supermarket and the library,” Mrs. Simpson Reid informed.

She also added that the school’s ‘Pull Out’ programme, which involves giving students who are falling behind in maths special attention in the school’s Maths Centre, underscores the school’s determination to improve numeracy grades.