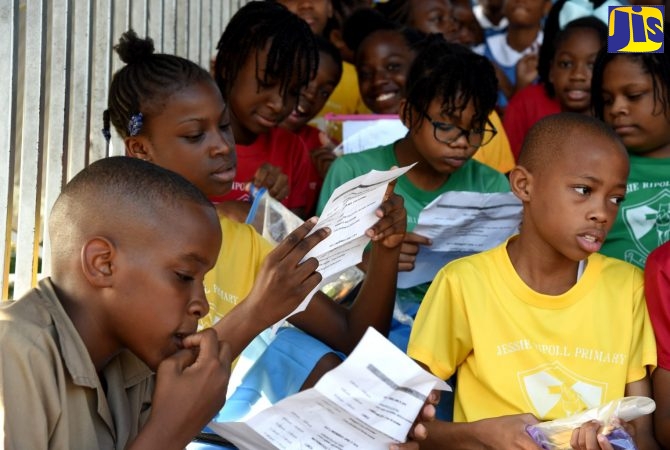 JIS: Students, parents, principals and educators have given positive feedback about the Grade Six Ability Test, which is the first in a series of tests for the new Primary Exit Profile (PEP) examination that was administered on Tuesday (February 26).

The Ability Test measures students’ ability to reason with words and quantities (quantitative and verbal reasoning). It represents 30 per cent of students’ profile. This test consisted of 40 single select multiple-choice items.

“They said it was relatively manageable. They said most of the questions were at their comfort level,” she told JIS News.

“Many of the students said it was manageable. They say the first part was manageable, but the last part was challenging. They were very apprehensive. We had a hard time getting them to settle down. The teachers were also apprehensive, but once they got settled, things flowed. What helped was that it was not a written exam, but a multiple choice,” Mrs. Gaynor said.

These students sat their examination at New Day Primary School in the inner-city community of Grants Pen, which is close to the school.

“For the most part, they seemed upbeat. They took it as a normal day of an exam at school,” he said.

“They said it was manageable. It was not as bad as they thought it would have been. The teachers prepared them well. They [the teachers] stuck to the curriculum. They prepared the students based on the curriculum of the Ministry of Education, Youth and Information,” Ms. Ainsworth said.

Student, Iris Gelly Primary School, Davieon Stanley, said he is happy the first exam is over and is looking forward to the Performance Task and the Curriculum Based Tests.

“I felt happy because it was multiple choice. Some of the questions were very easy. I liked the exam,” Davieon told JIS News.

“It was okay. It was not what I expected. They gave most questions that I already studied, but I was expecting it to be very hard,” she said.

PEP is the series of tests that have replaced the Grade Six Achievement Test (GSAT) as the national secondary school entrance examination. PEP is intended to provide a better and more complete profile of students’ academic and critical-thinking capabilities at the end of primary-level education. It comprises a Performance Task Test, Ability Task Test and a Curriculum-Based Test.

The Data Collection and Information Sharing (DCIS) Programme is an initiative of the Ministry of Education, Youth and Information and managed by the Information Division.  The Ministry recognises the importance of being able to access accurate and current data to...
read more