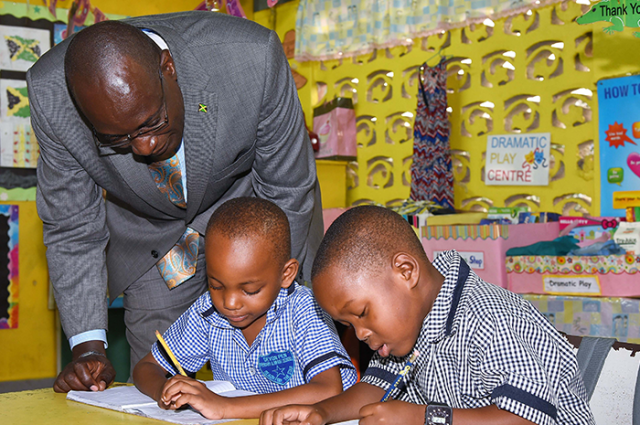 JIS: Education, Youth and Information Minister, Senator the Hon. Ruel Reid, is urging school administrators to submit early the projection of furniture and other resources they will require for the reopening of school,  in order to facilitate timely procurement and delivery.

He noted that several schools experiencing shortfalls in furniture stock have waited until a few weeks before the start of the academic year to indicate their need.  He said that ideally, notice should be given in December of the previous year.

“It means that whatever (you) need for the new school year… (you) should be in a position to be articulating to the Ministry by the end of December each year and not wait until the last minute,” he pointed out.

He is also encouraging administrators to serve sufficient notice where they propose to increase student enrolment and need additional furniture to accommodate them.

He explained that the early notification is necessary to prevent disruptions in the procurement process and delays in the delivery of items by the manufacturers.

“We don’t want a situation where you have increased the population of the school and then say you are waiting on the Ministry for furniture… because we would have to redo the whole process to reorder, and it’s going to take some time for the manufacturer to deliver. So, let’s work together and make sure that whatever the needs are (you) get the information to the Ministry in good time,” he stressed.

Meanwhile, Senator Reid advised that the Ministry plans to establish a furniture-maintenance programme in schools.

He said the Ministry will be working closely with its regional offices each term to track and identify desks and chairs that can be fixed.

“We want to make sure that you always have adequate furniture and that you get them long before school reopens in September,” Senator Reid said.

The meeting culminated Senator Reid’s visit to several schools in St. Mary comprising the Ministry’s Region Two as part of his tour of institutions to mark the start of the 2017/18 academic year.

CAPTION: Education, Youth and Information Minister, Senator the Hon. Ruel Reid, looks on as five-year-old Devon Primary and Infant School students, Quewayne Davis (centre) and Jayquon McIntosh, demonstrate their writing skills. Occasion was a visit to the institution on Wednesday (September 20), during the Minister’s tour of institutions in St. Mary.